Blaze Young, our most recent Breakthrough Talent winner, on how nostalgia, community and a desire for change is driving her at newly opened Nieuw Ruin.

At Fremantle’s newly opened Nieuw Ruin, Blaze Young, our most recent winner of our Breakthrough Talent award, is leading her first kitchen. Backed by Foxtrot Unicorn’s Dimitri Rtshiladze, and with an all-woman management team across kitchen, floor and bar, the venue is an incubator for young talent, with fresh ideas, great drinks and an eye for nostalgia defining traits. A couple of weeks in, Young opens up on leadership, her team and how community has driven her menu. 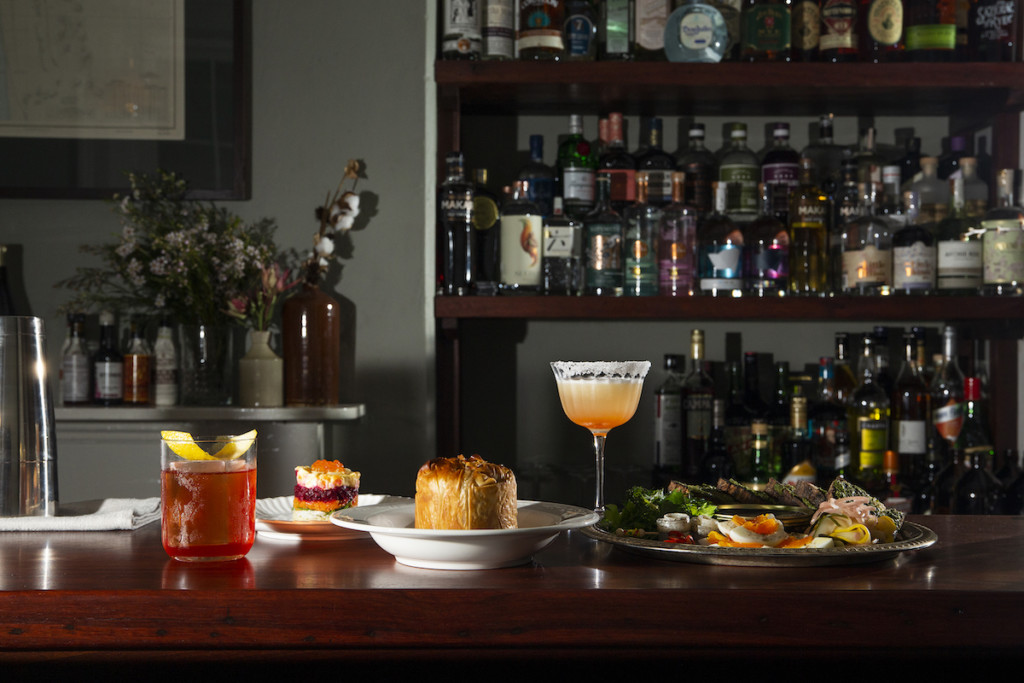 Why did you decide to come on board at Nieuw Ruin?

Dim and I have been friends for close to 10 years – he was one of the first of my generation in hospitality to start to build his own venues. When Foxtrot Unicorn opened it was incredible to see him carving out his space in the industry, and we had constant chats about him launching a second venue. I was wanting to find my next project after my time at Madalena’s, and knew I was ready to step into a head chef role. With a little bit of convincing towards a food focus, Nieuw Ruin was born.

Dim and I really see eye to eye on a lot of different things. He’s happy to give people the autonomy to create what they’re interested in and passionate about. Then with me being a Freo local I was very excited to open a venue within my community. We want it to be a place where people are able to walk in and feel at home while eating sick food and drinking wine that they have maybe never heard of, with a focus on quality producers and old-school, genuine hospitality. There’s a really beautiful authenticity to that I think.

This is the first time you’ve had the freedom to cook your own food. What does it look like?

It’s been really fascinating figuring out how I want to express myself. My food has always been produce focused – simple and elegant, but with punchy flavours. Something I loved about Foxtrot was its tongue-in-cheek element, and I really wanted to capture that here. Pushing people into trying new things while also keeping it familiar and nostalgic was always the aim, and I think we’ve done that.

You can also see a lot of influences on the menu from the places I’ve worked, too – a lot of it is based around relationships I’ve created with suppliers, and there’s little nods to people and chefs throughout. Kurt Sampson, who I worked with at Propeller, really ignited a flame in me to celebrate lesser-known cuts of meat and turn things that were otherwise unapproachable into something you’d want to eat; if he hadn’t shown me how to break down a whole pig early in my career, you wouldn’t be seeing the pig’s-head bitterballen on my menu, for example. 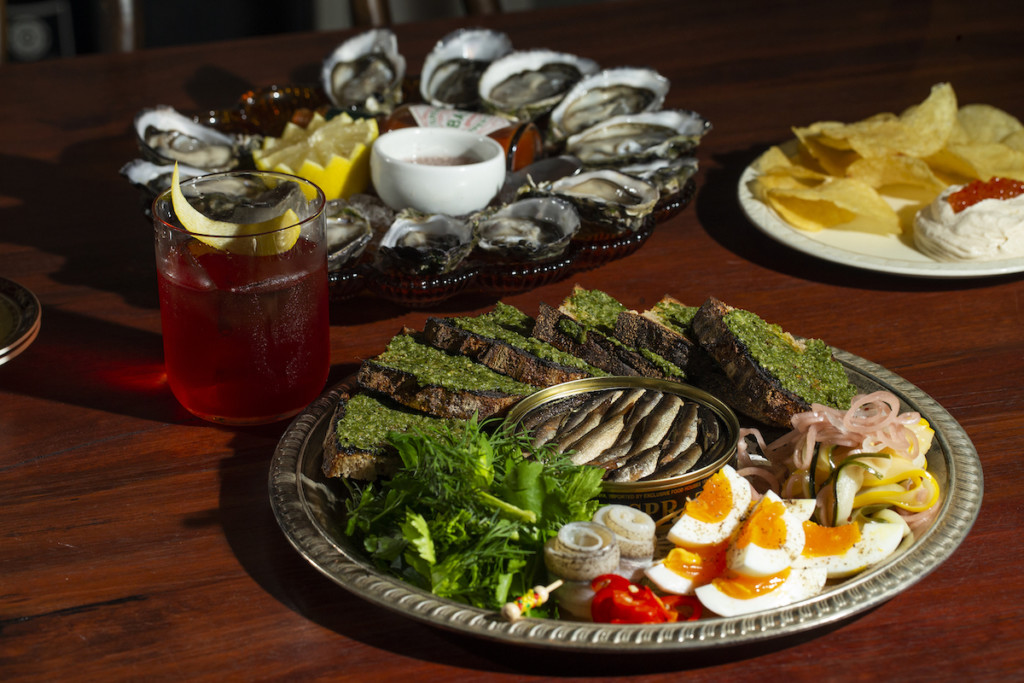 You have oysters with Tabasco, chips with taramsalata, and spatchcock with gravy on the menu, but there are some more adventurous things, too. What are people liking so far?

People have been loving the devilled livers, which comes from my time at Billie H with Alia Glorie – that’s what got me loving super-nostalgic, revamped ’70s dinner-party food. The dish is about spicing the livers enough to make them a bit more palatable and to complement their richness; we do this by creating a reduced cream sauce and spiking it with an insane amount of mustard so you get this tangy, spicy heat. They’re pan fried, tossed in the sauce, then served on toast. It really highlights their beautiful texture.

I like the idea of taking something that’s fallen out of relevance, revamping it and presenting it in a way that suddenly sparks nostalgia in people – like the kind of things you find in naff old Australian cookbooks. I’ve got a braised Wagin rabbit and pork pie floater on the menu, for example. That’s where I’ve taken a lot of inspiration for this first menu – I wanted to elevate some old classics so people could instantly feel at home with my food while trying things they may not see every day.

We’ve covered offal, what about plants?

I’m really excited about the salad. It’s a plate of leaves – we get them City Farm – dressed with salad cream where every leaf is a different one from the garden. There’s red tatsoi, mibuna, horseradish, broad-bean leaves and red-stem chicory. It’s disguised as really simple but it’s actually quite complex due to the contrasting flavours of each leaf.

Then I’ve got a char-grilled Jerusalem artichoke dish where we hard-roast the artichokes until they get real jammy and serve them with burnt honey and goat’s curd. It walks that line between being sweet, savoury and salty. It also makes the entire venue smell like honey, too, which is a great little bonus.

Cocktails and wine are a big focus. What are you drinking?

It’s hard to pick a favourite but I’ve been drinking a lot of Le Coste Bianchetto, which is a gorgeous skinsy Italian white. I seem to gravitate towards wine that I want to pair with food and this would drink beautifully with our Jerusalem artichokes. We’re also huge chardonnay fans here. It’s what you’ll find us all drinking after hours, and we’ve got an entire shelf to drink through. I’d start the night with the Novum Marlborough chardonnay and eat your way through the menu.

Otherwise, we had Lou Chalmer, a somm and a winemaker, help us shape the list and find lesser-known producers and she’s making this beautiful ambrosia called Yume, which is super-complex and floral. At 6% it’s a really nice low ABV option for people who want to try something a little different.

This is your first time building a team. What were you looking to do when you started recruiting?

I’ve kind of called on all my favourite people. It was so exciting to reach out to people I’ve worked with before and friends I’ve made along the way. My sous-chef, Jiordan McCamish, is someone I met at Billie H, and I went and worked with her at Si Paradiso, so we’ve sort of been moonlighting in each other’s kitchens for the last couple years. In that sense it felt like getting the gang back together. She’s such a gun and we really see eye to eye.

Then everyone else kind of came to us, which is really flattering – people who wanted that autonomy and really wanted to be part of what we were trying to do. Everyone’s local, too. I think it was a really cool opportunity to give the hospo kids in Fremantle a new space and a new project and we were really lucky to be approached by a lot of talented people. 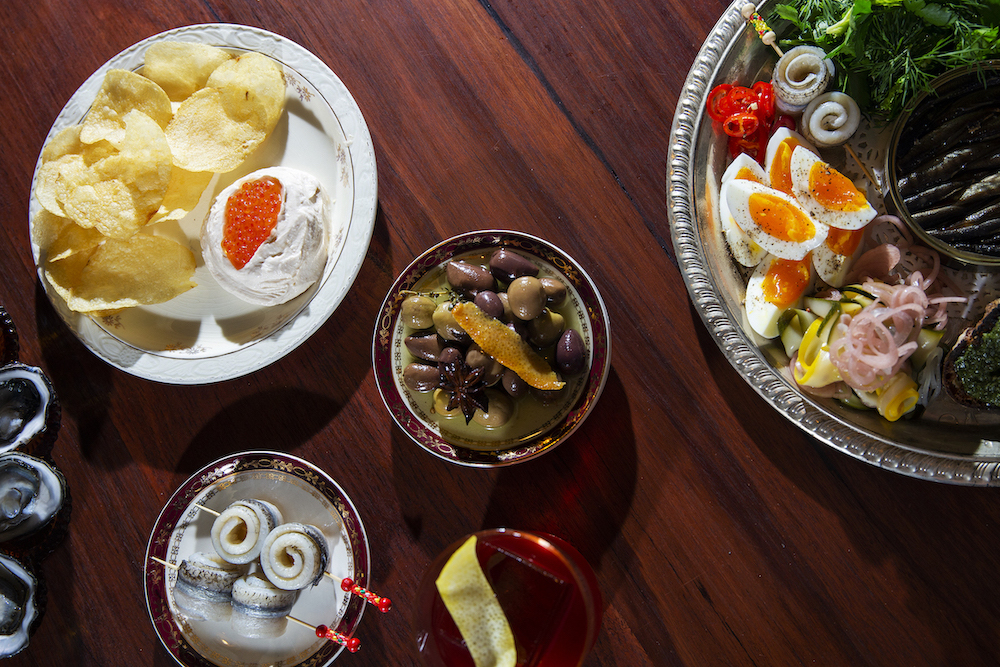 With Maria Marter, your venue manager, and Pippa Canavan running the bar, you have an all-woman management team. Was that a conscious decision, or did it happen organically?

It just was how it happened. I’ve been quite vocal about supporting women in the industry, so I was thrilled when so many dynamic women wanted to come on board. There’s some real guns out there, so we were just lucky that people wanted to come and work with us.

I think women are often overlooked in management – I’ve certainly been in a position where I haven’t been chosen because I’m not a man. And I’m really passionate about trying to lead in a different way. I don’t expect people to be superhuman – you need to give people breaks, it’s OK to have a shit day, it’s OK to be sick. It sounds really basic, but it’s just not the standard when it should be. And I think being more compassionate and being more engaged in teaching your younger crew – especially the young men – that there shouldn’t be a really strict hierarchy, that whatever I say, you have to do, you know? You should be thinking for yourself, you should be looking after each other, you should be able to create in your section.

Hospitality is pretty far behind a lot of other industries in terms of where that kind of equality is, so my main focus was creating a really safe space for everyone. I want there to be longevity in this industry and it to be a viable career choice and I believe that a supportive and safe working environment is what will help us to achieve that.

You were our most recent Breakthrough Talent Award winner. What advice would you give to any young, aspiring chefs who want to follow your lead?

One is that you constantly need to keep educating yourself. I’m a self-taught chef, but I’m constantly reading and borrowing cookbooks – me and my friends trade them all the time. You have to keep pushing yourself to try new things and taste new things. That goes hand in hand with not being afraid to make mistakes. I make a lot of mistakes in front of my chefs and I always have. I think you have to be okay with that otherwise you’re afraid to create, and giving your chefs space to make mistakes is super important. As long as you’re paying attention and noting where you went wrong, it’s the best way to move forward.

For the rest, be nice to everyone, give everyone the time of day and make an effort to meet people along the way. I have put so much energy into the relationships I have with my suppliers and that effort has come back tenfold these past few months. We have been so grateful for the support we have received from not only suppliers but from the media and the community and I think that comes down to the relationships we’ve all built along the way.

NewsProducer Spotlight: Kommunity BrewNewsSomething on the side: top operators on the side hustles future-proofing their businesses.EditorialWA’s Best Noodles