Summer often sees a rush of venues swinging open the doors just in time for the holidays, and this year is no different. But with the likes of Casa, Willi’s at The Royal, Brown Street Grill, Picada and the refresh at Karrinyup already having set the tone for another wave of openings, the summer of 21/22 is looking more delicious than ever. As we edge toward 2022, here’s the best of the latest. 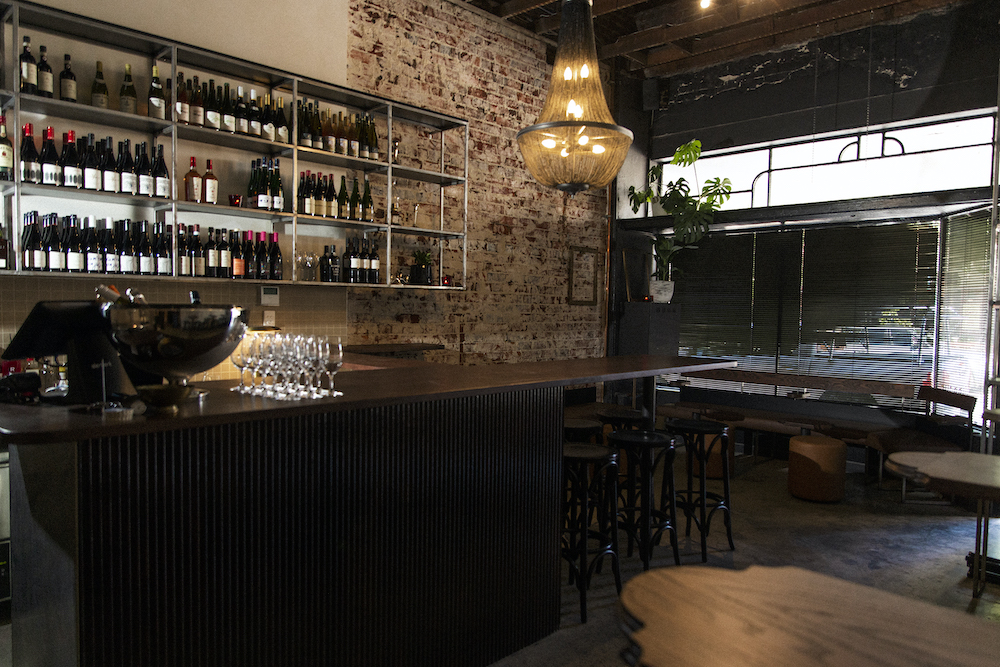 Continuing Perth’s ongoing affair with bars masquerading as restaurants masquerading as bars (see Casa, La Madonna Nera, Vincent Wine and Willi’s at The Royal for starters), Bar Rogue has landed on Beaufort Street doing a little of both. Arrive thirsty, and Sarah Atkinson (our 2021 Exellence in Front of House winner, no less) can pour bittersweet apéritifs or prog-rock wines made for quenching. Arrive hungry, and Liam Atkinson’s food can stretch from snacks to a full meal, led by cold fried chicken with caviar and backed up by a duck-egg chawanmushi with abalone and of-the-moment Mushroom Guys ’shrooms. The oysters, too, are rather rogueishly plated on scrunched-up tinfoil. A fitting follow-up to Le Rebelle, with the attitude to match.

Two forces of the WA food and drink scene combine at Frui Momento, with chef Seth James and winemaker Larry Cherubino teaming up for one of Margaret River’s most anticipated venues. James has form in the region, having helmed nearby fine-diner Wills Domain for the best part of a decade (and racking up countless awards along the way). But anyone expecting the same kind of marathon dégustation as Wills may be pleasantly surprised by a more low-key à la carte offer where exceptional local produce is the focus. The 50-seat venue will be complemented by a cold bar and Champagne lounge and a cellar that digs into the Cherubino collection and adds bottles from Italy, France and Australia for ballast. As for an opening date? Sometime in December is the word, but watch this space. 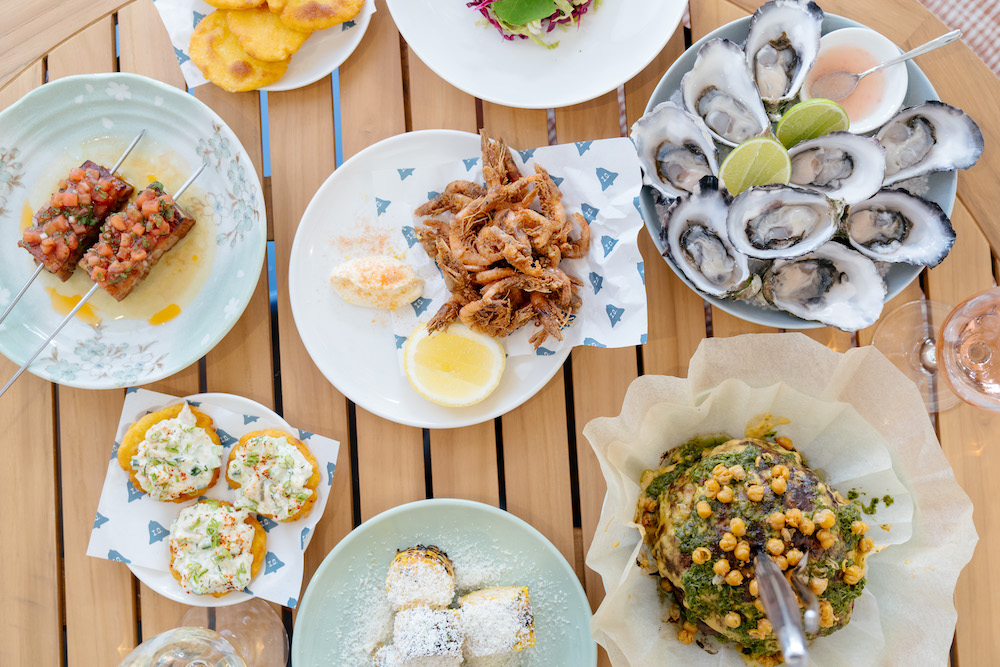 It might be a summer pop-up, but Indigo Oscar certainly has plenty of ticks next to its name. There’s the influence of former Barangaroo House and Chiswick chef Tom Haynes in the kitchen. The beachside location in Cottesloe’s emblematic Indiana Teahouse. The presence of ex-Besk (and Aria) chef Tom Harper day-to-day. A drinks list built for good times. And the refresh that lends the whole thing a Hamptons-meets-the-tropics vibe. But perhaps the biggest draw is on the plate, where a Latin American edge and a preference for seafood keeps things fresh and cool. There are a couple of ceviches, crisp school prawns and octopus escabeche for starters, while mains branch out into Rose Mallee flank steak with chimmichurri or chipotle cauliflower with peanut salsa. Plus there’s Sangria sorbet with coconut and Pisco to cool off (you know, if the ocean isn’t fine enough). 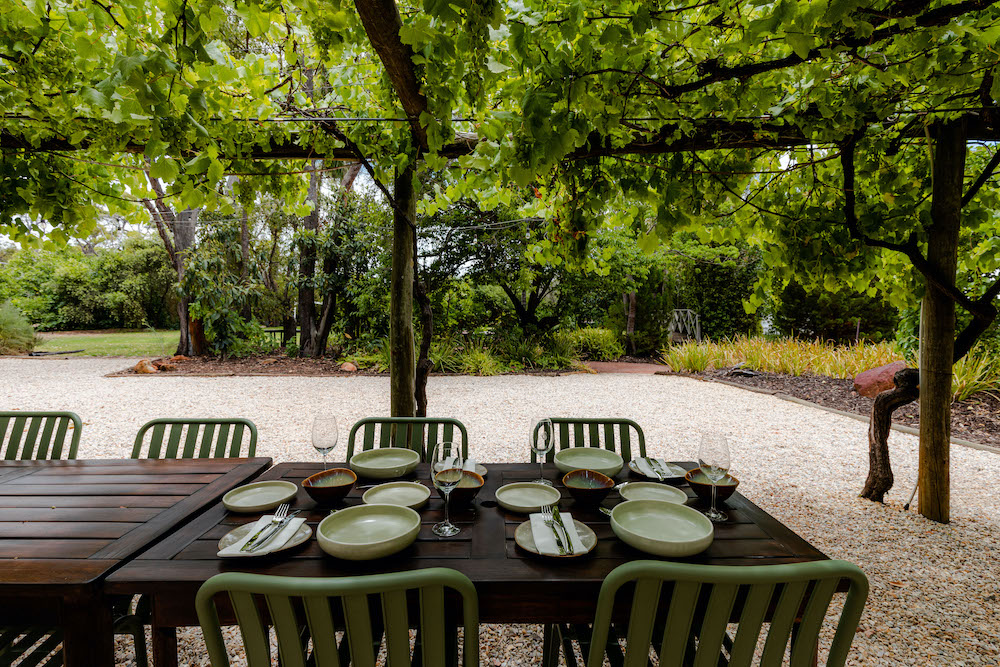 What’s the next logical step for one of the state’s best craft distilleries? If Old Young’s Kitchen is anything to go by, the answer is one of the state’s more ambitious new restaurants. Set next door to the Swan Valley distillery, with former Fervor and Fleur chef Rohan Park on the pans, the restaurant brings native accents to a globetrotting menu that isn’t afraid to mix it up. Things might kick off with raw scallops flavoured with loquat and native lemongrass, move to kangaroo tartare with emu egg yolk and garum, then peak with a risotto flavoured with spent OY botanicals. House spirits prop up Patrick Torres’ (ex-Foxtrot Unicorn) cocktail list, while a generous low-to-no alcohol section caters for daytrippers. Nab a spot outside and soak it up. 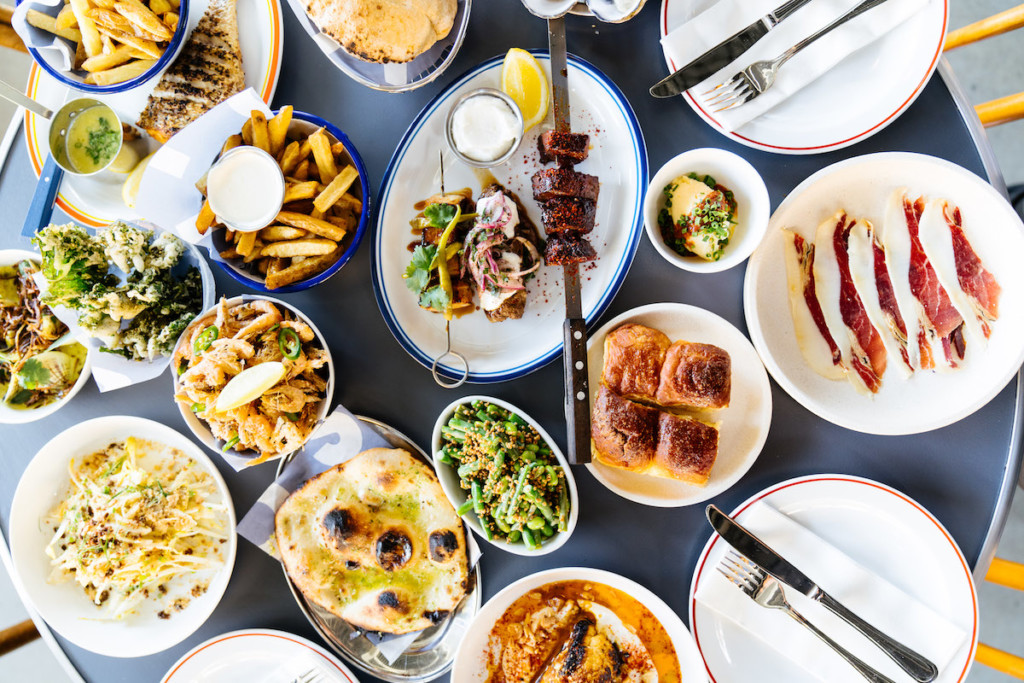 Gun chef Jesse Blake (Cumulus Inc; Petition; pop-up Eye Heart Rabbit) oversaw the development of the menu at Servo, the jewel in the crown of the Leederville Precinct, and he’s knocked it out of the park. Plates built for sharing occupy space on terrazzo and tile-coated tables, with woodfired bread the anchor for punchy snacks ranging from whipped cod’s roe with finger lime through burrata with kimchi and white peach. Elsewhere there’s plenty of interesting plant-based action to keep things fresh, plus a couple of big-format mains – think barbecued market fish with wasabi butter, yoghurt-fried chicken or a mixed shish grill. Wine, steered by Emma Farrelly, errs on the fresh and bright side, while Spritzy cocktails lead from the front. Don’t skip Servo Kebab, either, for takeaway stuffed pita with a difference. 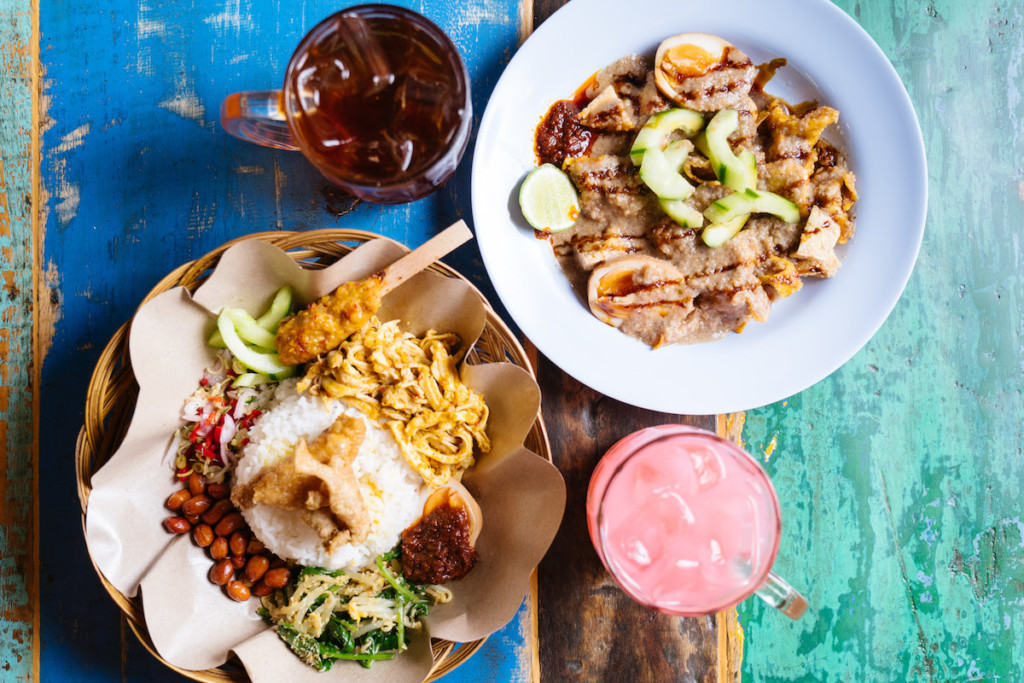 After a seriously long run-up, market favourite Suku has finally reopened at FOMO Freo, with Ria Zulkarnaen and Nick Mailenzun bringing their Indonesian fare to what’s been billed “Street Alley”. The menu draws on memories of Bali and greater Indonesia, with a tight menu reminiscent of a neighbourhood warung. The bright space specialises in just a few dishes, with the nasi Bali – what they call “Balinese chicken rice” – headlining with pulled meat, braised egg, two kinds of sambal and chicken crackling surrounding a mound of rice. It’s joined by peanutty gado gado and a deeply spiced beef rendang. Specials join the regulars, and there’s a clipped drinks menu repping iced Milo, tea and jelly tea for good measure. 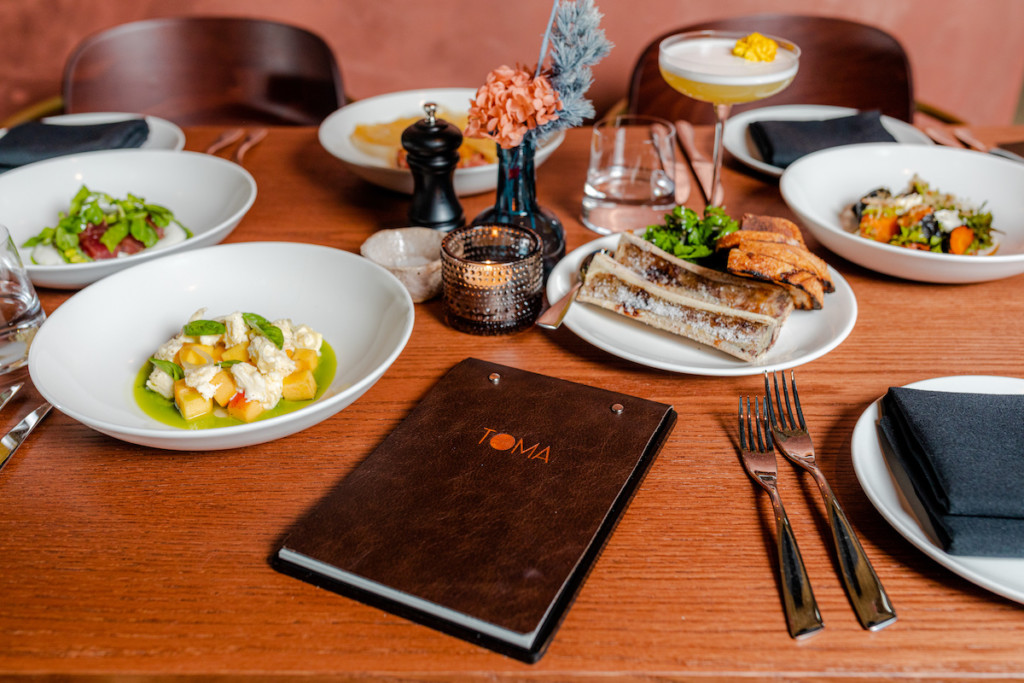 The multi-venue extravaganza that is Pirate Life Perth brings with it the prospect of good times and cool beers in the brewery, but it’s the restaurant, Toma, that’s turning heads. A woodfired parrilla fuels proceedings, with steaks cooked over charcoal (add a lobster tail if you’re game, and a side of lobster mac and cheese while you’re at it), while snacks run the gamut from wood-roasted carrots with macadamia and yoghurt, to beef tartare with bottarga, to bone marrow on toast. Wine straddles Old and New worlds, with plenty to pair with the protein-led menu. Subtle? Hell no. But as a restaurant that takes its name from a tomahawk steak, what else would you expect? 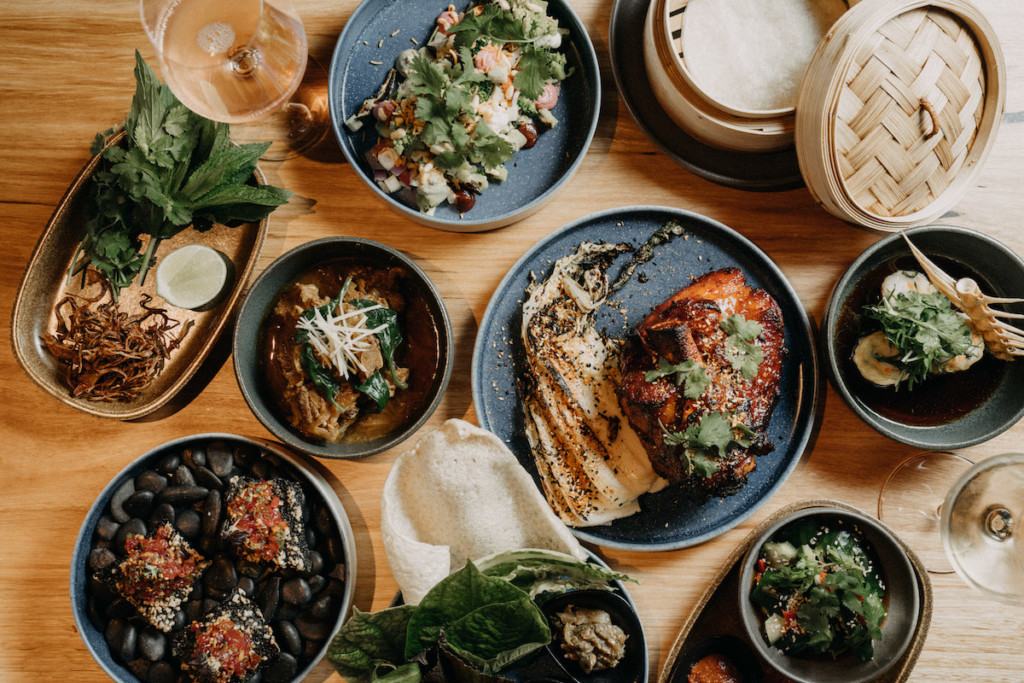 With a host of vaunted Bali restaurants to his name (Mama San and Sarong among them) and Sydney’s Longrain and Jimmy Liks on his CV, Will Meyrick making Perth his home was something of a coup for the West. Even more-so when word got out he was opening a 120-seater in Leederville. Food is vintage Meyrick, drawing on influences from throughout his career and across Asia from the nam prik jaew bong flavouring the kingfish betel leaves, to the tandoori lamb rump or the syrupy black sticky rice with mango and caramel-stout ice-cream for dessert. Roll up with a group, give the tropical cocktails a nudge, and let the good times unfurl before you.

EditorialBen Jacob on opening his first venue and cooking local in the South WestEditorialHot Plates: Our Critics’ PicksNewsForward Thinking