Old Young’s Kitchen in the Swan Valley officially opened in January, with chef Rohan Park running the pass and Old Young’s Gin permeating throughout the menu. Park brings his love for native foods, developed during his time travelling around Western Australia creating unique pop-up dining experiences with Fervor and as sous-chef at Fleur, and integrates it with local produce from the Valley and the kitchen’s gardens. We spoke to Park to get the lowdown on his new project, and what to order from his menu. 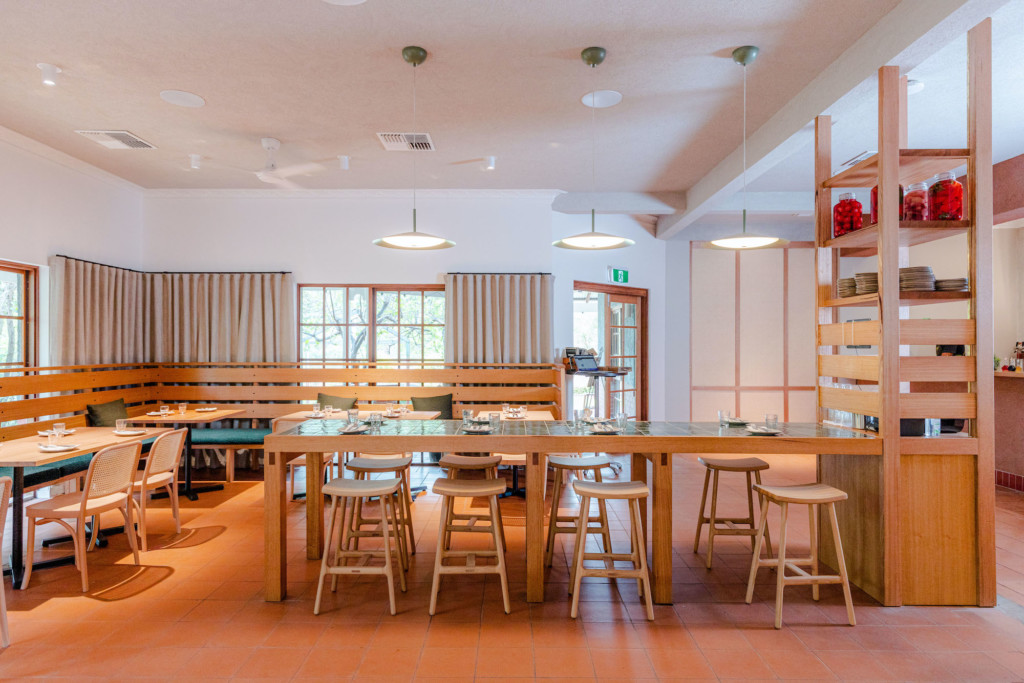 What attracted you to Old Young’s Kitchen?

Having my better half being the Swan Valley food ambassador, it was only a matter of time until the right offer pulled me to the Valley. I have an existing relationship with James Young, founder of Old Young’s Distillery and Gingin Gin through Fervor, where we were utilising the Six Seasons Gin for our welcome drinks. So when James called and said he wanted to wet his feet in the hospitality industry starting with Old Young’s Kitchen, I jumped at the opportunity.

What do you love about the venue?

It’s a package deal. The staff are all a pleasure to work with across all aspects of the business (the tasting rooms, distillery, front of house, bar and kitchen). The décor is refreshing and light. But the gardens and the glades are a huge drawcard for me. We had Mark Tucek from Tuckerbush curate the native element to our gardens and planter boxes, so for me it’s a chef’s wonderland. We have everything from figs, mulberries and loquats to pepperberry, native lemongrass and three different types of native mint all growing on the property ready to be picked fresh and used on our rotating menus.

How would you describe your cooking style at Old Young’s?
I was trained in classical French cooking but my “after-school” passion and extra-curricular training at home is all Japanese. After my time with Fervor (which I often call my second apprenticeship), my cooking style took a big turn incorporating Aboriginal ingredients with fermentation and a more pared-back Nordic style, heavy with technique and finesse. These days my food has taken more of a relaxed sidestep with technique only where it belongs and where there is reason, letting the produce and the flavours do the talking. 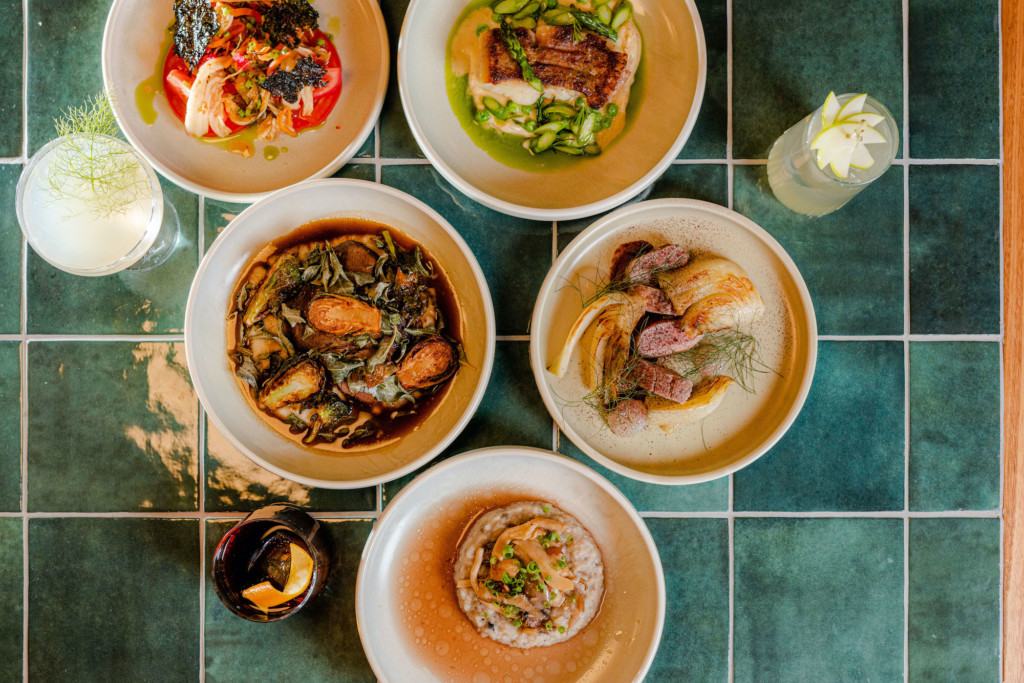 You’ve incorporated plenty of native ingredients into the menu. There’s even a guide on the back of the menu. Any favourites?
Geraldton Wax blows my mind, having grown up with it surrounding me almost everywhere I turned, it really amazed me that no-one was using it or even knew it had a flavour or a use in the kitchen. Since then, I would have to say quandong is my favourite native ingredient.  Eating my first quandong of the season every year is always a special moment. The diversity of the fruit and the variance between individual fruit boggles me. You can eat quandongs and have a totally different flavour in each one, from sweet, to tart, to salty, to bitter.

Any unusual flavour pairings on the menu that you’ve discovered really work?
Crocodile and lemon myrtle chorizo, served with lilly pilly dust, squid ink and black garlic aïoli and a lemon cheek. It just works. Normally I try to eliminate all standard citrus from my dishes but this one just needs it, with the earthiness and umami of the aïioli, the savoury grilled sausage flavours of the chorizo and the tart, native cranberry aspect from the lilly pilly.  This was a dish that I liked, but after squeezing over the lemon, I loved it.

What’s on the menu for people who don’t eat animals?
Old Young’s 1829 Gin spent-botanical smoked risotto featuring mushrooms from The Mushroom Guys. Spent botanicals from the 1829 distillation process are collected and dehydrated before being used as a smoking medium to smoke the risotto. It’s then seasoned for service with a fermented tasty paste, made with all of our waste trim from the mushrooms along with spring onion, garlic, nutritional yeast and rice koji. Served atop the risotto are mirin glazed oyster mushrooms and chives, with a dashi broth of shiitake, strawberry and kelp, and shiitake oil poured around it. 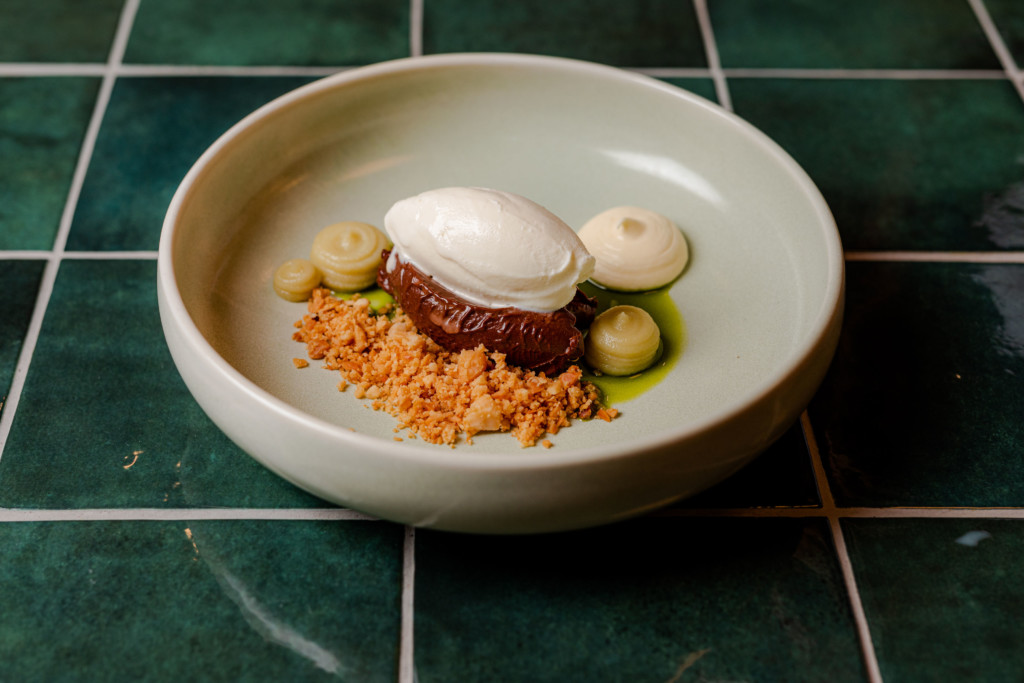 Something sweet to finish?
My personal favourite is the 64% Ecuadorian dark-chocolate ganache blended with a zabaglione, served with 15% white-chocolate cream, green apple and sake gel, macadamia crumb and fig-leaf oil, then finished with a light, fresh fig-leaf gelato.

Old Young’s built its name as a distillery first. What should we be drinking?
Gin! All of the dishes at Old Young’s Kitchen have either been created with botanicals used in the different gins or made with pairings in mind that apply to either gin or vodka, and the genius stylings of Patrick Torres on the bar gives us a repertoire of intricate cocktails that tie in perfectly with most of our dishes. 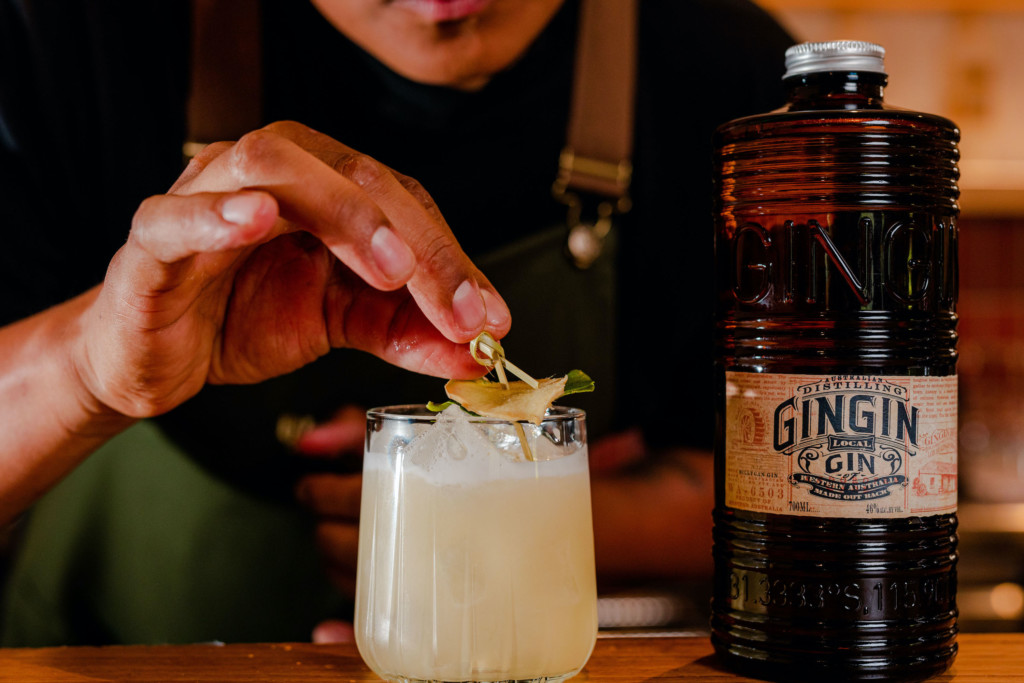 What experience do you want diners to take away from Old Young’s Kitchen?
Eat well, drink better! This is the mantra. I would also like customers to leave with more knowledge of Aboriginal and less-common flavours with new acknowledgement and respect. If they leave with a couple of bottles of our award-winning gins or vodkas, then that makes me a happy man too.