The South Fremantle staple has launched the bar it always wanted to, right upstairs from the restaurant. Chef and co-owner Adam Rees gave us the rundown.

When Dani Flauzino and brothers Joel and Adam Rees first dreamt of Madalena’s, they saw it as a bar more than anything. A place to drop in, have a snack, a drink, another snack, another drink, then move on into the night. But as the kitchen kept ratcheting up the quality, and the South Freo staple built a national reputation for its outstanding seafood cookery, the venue evolved away from its original blueprint.

Perth is the better for it, but for the co-owners, there was still an itch still to scratch. Finally, with the renovation and opening of the upstairs space above the restaurant, the dream of Madalena’s Bar is fully realised. We caught up with Adam Rees to talk snacks, crudo, housemade charcuterie and sunset cocktails that roll into late nights.

Madalena’s has always trod a line between restaurant and bar. Why the decision to go all in and put a full-fledged bar upstairs?

When we all first met up and talked through what we were going to do at the original it was originally going to be like a boteco-style bar, not dissimilar from the kind of places you’d find in Sao Paolo. That was the original dream, like a music venue, somewhere that does small plates, South American kind of food – a buzzy little bar. It was like that for a few months, and then I think I got a bit carried away with all the food.

When the possibility of doing something upstairs came up, we were like “Sick, let’s make the bar we always wanted”, and it just kind of works perfectly with the restaurant downstairs – now we’ve got this awesome restaurant and we can send people upstairs if they just want a drink and a nibble, or they can go up and wait for a table and come downstairs, or spend the whole night there. 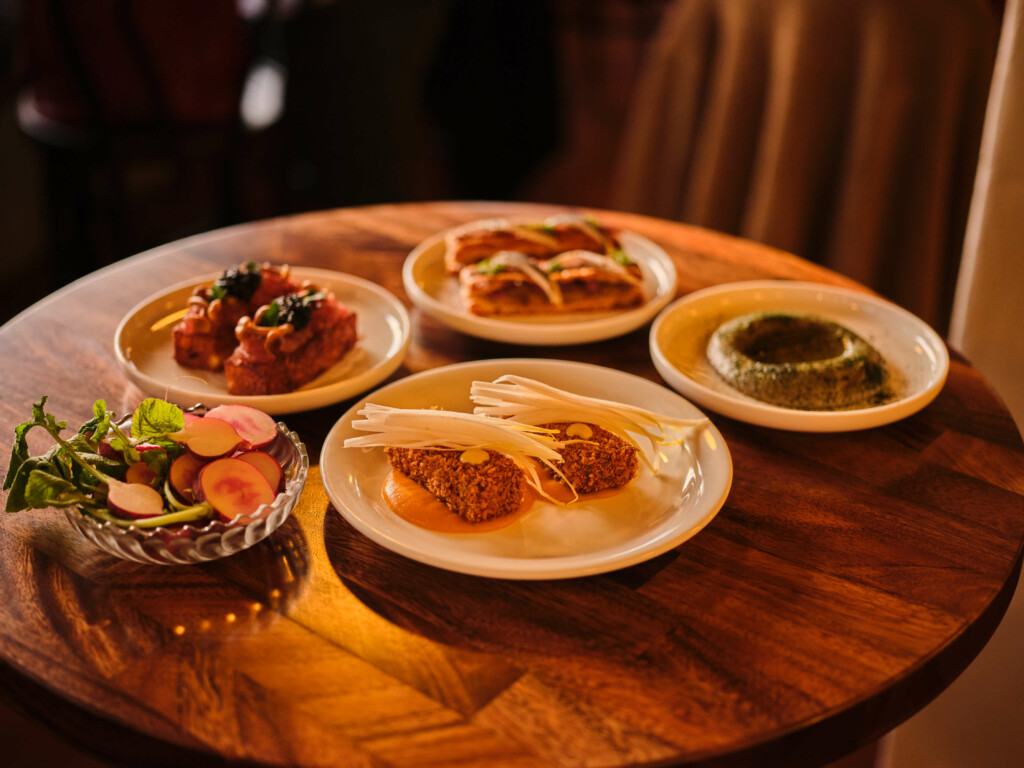 How would you describe what the tone is like up the stairs?

It’s definitely a bit more casual. But Dani [Flauzino], my sister-in-law, she designed the whole space and it’s kind of like a step up from downstairs, in the sense of the attention to detail, the shelving and just the creature comforts – everything looks a little bit nicer, but it has the same kind of colour scheme and vibe of downstairs. We fit probably 60 people up there just all on the high tables – we decided to go with a high-table, bar-service vibe – and when we do parties upstairs we’ll probably have about 80 people.

And what approach have you taken with the menu? Is it different compared with downstairs?
I just figured it had to be different to downstairs. Of course it’s my food and I’ve got a certain style and a way to do things that I like, but I had to make it slightly different so the best way to do that was to make it more snacky. I always want to have at least three things that you can order by the piece, so if you like snacking and want to try a few things there is that option. I’ll always have a crudo up there, you know some form of beautiful fresh white fish, like coral trout or cod, all really simple. And also the French omelette, that goes really well. It’s a classic three-egg French omelette, no colour, and then we change the garnishes. So far we’ve done it with blue swimmer crab with like a kombu-lemon butter, then maybe there’ll be a shaving of truffles when they come into season.

For someone who wants to use it like the boteco you mentioned and just duck in for a quick snack, what do you recommend?
One of the most popular things we’ve got is a little French toast – it’s a little soft buttery brioche in like an eggy batter. That’s all crisp and spongy then it’s topped with a tuna tartare just seasoned with a housemade mirin and soy sauce infused with kombu and katsuobushi, so it’s just like this rich well-seasoned tuna. Then we get these lovely little mushrooms from the Mushroom Guys that we pickle. So it’s a really simple cross between textures: there’s the crisp, spongy brioche, the rich tuna and then the pickled mushroom. It’s a no-brainer, and it’s just two bites.

Then because we’ve not limited ourselves to just seafood upstairs, we are going to do a bit of meat. We got half a pig from Evan at Arimia the other day, one of his rare-breed pigs, and we broke a lot of it down to make charcuterie – that’s all curing now. Then the rest of it, the head and stuff, went into a pig’s-head croquette. It’s super-rich and fatty, so it’s served with a really bright persimmon purée and then just French witlof, which is crunchy and bitter to help cut through the richness.

And if you want to make a meal of it without coming down to the restaurant?
I would actually love it if people had a booking downstairs in the restaurant, they came upstairs to wait for their table and then they realised there’s enough food that they can have a whole meal upstairs. I’d probably get like two or three little snacks, a couple of oysters, definitely get a crudo and then maybe finish on the omelette or a plate of nice house-made charcuterie. 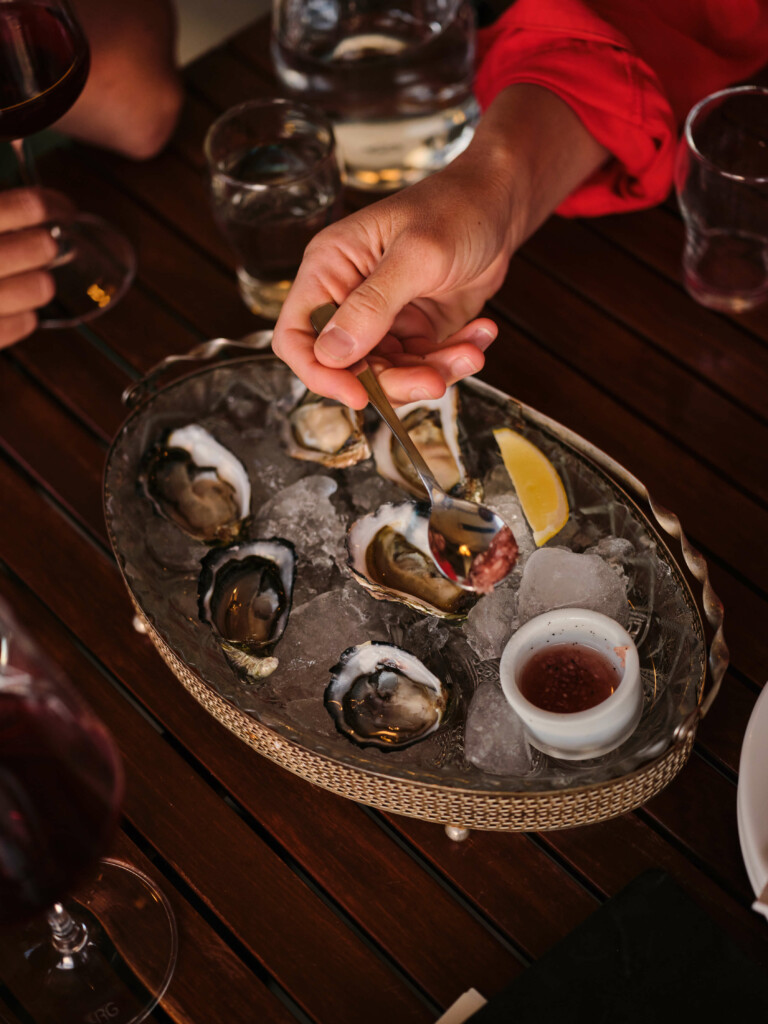 It is a bar, so what line have you taken with the drinks? Any standout cocktails or wines that are must-orders?
We’ve got Caelan [Parle-Schlapfer], who was the venue manager at Besk. He’s just a really passionate cocktail guy, the kind of guy who, when you walk in and say “I want this”, will know how to make it, and then do it really well. We definitely wanted to have more of a cocktail approach, because downstairs is obviously about natural and low-intervention wines. Upstairs we’ve still got the full wine list available, but otherwise we have 10 cocktails at all times, rotating seasonally, and we’ve got four taps instead of the two downstairs, so more beer.

For cocktails, my favourite is actually quite simple. It’s Chartreuse and tonic with geranium. We’re growing geranium – we’ve got all these like interesting herbs and things out the back – and one day we just put this rare breed of geranium in the drink and it’s just so aromatic on your nose. It’s quite a simple drink, but every time you take a sip you get a huge hit of this aromatic purple geranium. I can’t get enough of it, I love it. But then of course we get much more technical with our other cocktails.

What’s on the menu for anyone who doesn’t eat animals?
I’ve got one dish that’s vegan, which is one of my favourite things on there, which is a smoked eggplant purée. We just put eggplants on the barbecue and absolutely cook the shit out of them until they’re like black on all sides, and then you actually blitz some of the skin back through it so it’s like a really dark, smoky, caramelised eggplant purée. And that’s served with dried seaweed and radishes from our garden.

And what should we be ordering to finish?
We’ve got a full cheese selection, with probably six or seven cheeses, but then we will actually do the downstairs desserts upstairs, so there are always those three options for dessert.

One of the best parts about Madalena’s is coming in the afternoon, grabbing a plate or two and a drink and sitting out on the street or by the window and soaking up the afternoon sun. Can you still do this upstairs?
Oh, it’s even better. It’s pretty special up there at sunset, all the windows are open, you feel like you’re sitting outside, you’re elevated so you can see the streets below, you get to see the park across the road and then at this time of year the sunsets are usually pretty exceptional. Yeah, it’s almost better than downstairs. 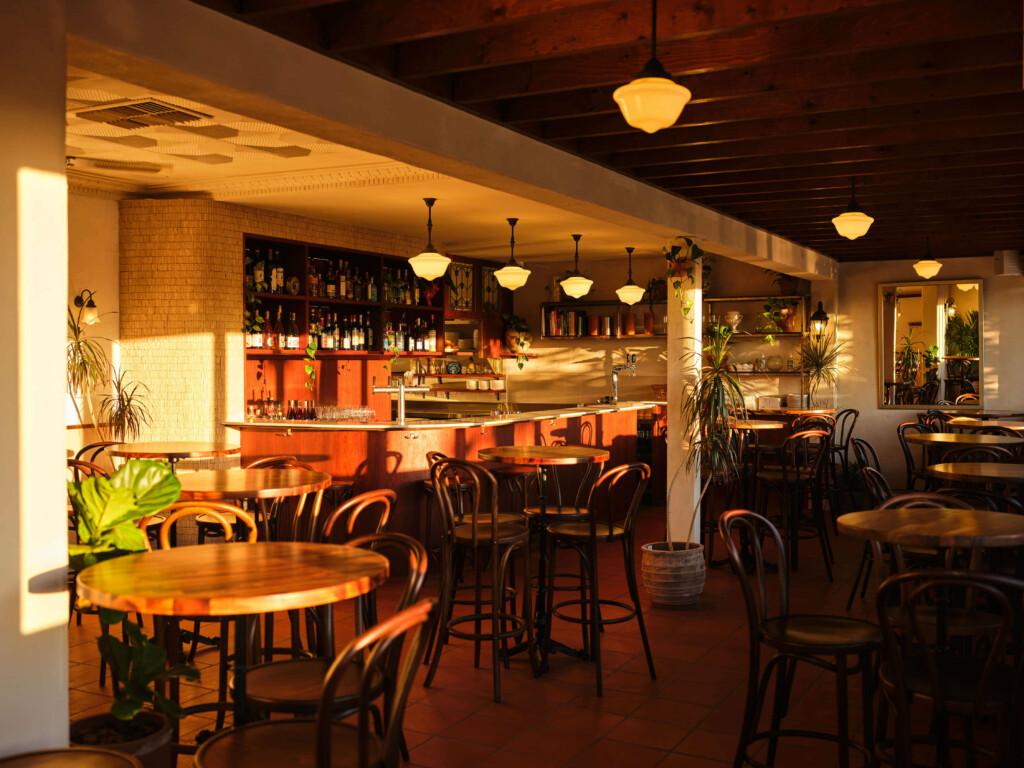 Are you going to be spending more time up in the bar kitchen?
Yeah exactly. I’ve had a new head chef, Oscar Holgado, take over – he’s downstairs – and I’m just getting upstairs all organised, trying to train people do upstairs and then I’m actually going on a break for three months to go to Portugal and France. So I’ll have it all running without me there for a while then I’ll come back and jump back in. 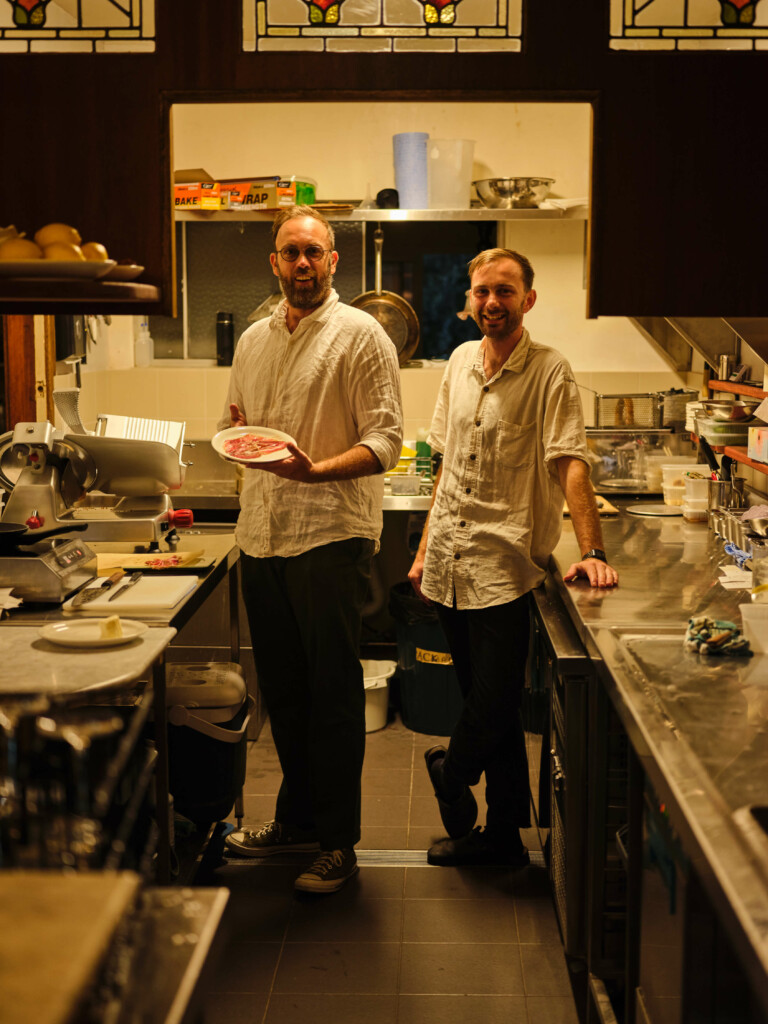 Sounds like you’ll be coming back inspired. For the people who are still on the ground in Perth, what experience do you want them to take away from the bar?
I would really like it to become a bit of a late-night spot. It’s pretty hard to keep people out in South Fremantle after 9 o’clock, but we’re definitely going to commit and stay open for the first few months until at least till 11:30 for food. I want to be that sort of neighbourhood bar where there’s a bit of a hospitality thing going on, people after they finish work coming down, always being able to serve a bit of food. We’re going to have parties up there, we’re trying to do a nice Sunday session every Sunday with DJs. We just want it to be a fun, casual, South Freo bar, sort of like downstairs, but without the serious restaurant menu.