Jessica Blyth draws on her wealth of  hospitality experience to inject life, empathy and happiness into Sonny’s, Mount Hawthorn’s newest neighbourhood bar.  She’s already winning hearts – and a huge following – with her approach to sustainability, ethical practices and commitment to diversity, not to mention great food, cocktails and wine.

Sonny’s, an upbeat 60-person bar named after a rescued greyhound, has landed in Mount Hawthorn right in the centre of – to quote Blyth – one of Perth’s most lively “hell magical” bar and café strips.

Punters are welcomed into this former bank building, where classy 70s-inspired décor and sunken seating form the backdrop, with dishes like grilled Japanese rice balls and charred eggplant cooked over a wood fire and a drinks offering with an emphasis on wines, spirits and beers highlighting diverse and smaller, boutique producers.

Blyth, who has overseen the management of respected Perth bars and restaurants such as Apple Daily, No Mafia and Fleur at The Royal, has teamed up with dynamic sommelier Daisy Case and fire-loving chef Aaron Read to create a space that pays tribute to all the inclusive aspects of hospitality. The team sat down with us to reveal more.

What is Sonny’s all about?

Jessica Blyth: Sonny’s is a melting pot of my 12 years in hospitality, the travels, memories, and experiences we’ve had with people who I’ve worked with or met over that decade. We wanted to turn all of those memories and feelings into a venue where people come to have fun and feel connected.

Also, a space in which a collective of passionate professionals in their respective hospitality fields can focus on what they do best and create a venue that doesn’t focus on doing just one thing but can be whatever the customer wants it to be. Somewhere they can get a bottle of wine, a cocktail or food, in an exciting and welcoming space. A venue doesn’t have to fit under one label. It seems like everything has to be categorised these days for people to understand what it is, but the best way to understand Sonny’s is just to come in and work it out for yourself and make your experience what you want it to be.

Where did the 70s theme come from?

JB: We worked with Fremantle designer Design Theory, and mixed mid-century with art deco, which evolved into the fit-out we have now. We had the sunken space to begin with, which naturally creates a 70s feel, so it took on that feeling, especially once we added furniture, plants and other random objects. My Mum has been going to antique stores, picking up knick-knacks and going a bit crazy buying pot plants, plus the staff have brought in their books for the corner nook, and the designers hit the jackpot with a few Gumtree finds. 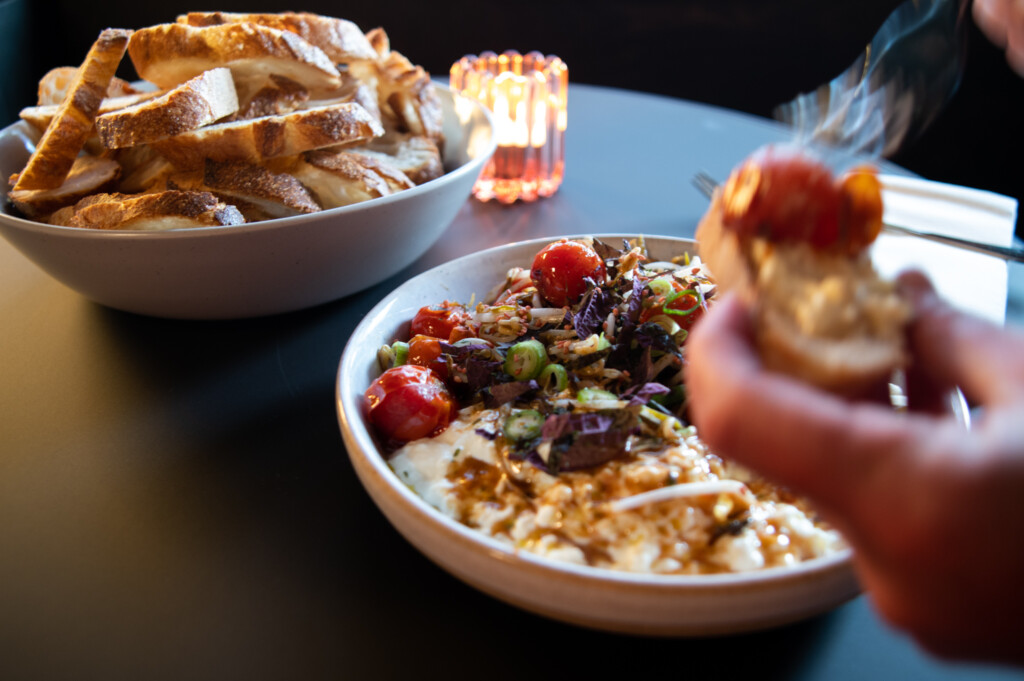 What’s on the menu?

Aaron Reid: Working with smaller suppliers and ingredients that may have a very short season or limited supply means that there are items on the menu that may have a short run. The advantage of this is that we can feature foods that are at their best and showcase some unusual and exciting ingredients people might not see elsewhere. Plus, people’s experiences will be slightly different every time they come in. I don’t feel obliged to keep something on the menu just because people like it, especially if that means we’re not using the ingredients at their best.

Having said that, we are working on having a relatively stable backbone of share plates that can be backed up by some more unusual dishes, which will change regularly. Some of the opening dishes have been pickled Albany sardines with iceplant, pork rillettes with housemade pickles or stracciatella with Illawara plum – all good with a drink. And then a few larger plates kissed by fire.

What is Aaron’s approach to the food?

JB: We like to joke that Aaron is like “Man v. Food” without the toxic masculinity. If he could, he probably would have built the kitchen from scratch with his bare hands. Aaron works with the freshest local ingredients and things he can make or source himself and is constantly experimenting and pushing boundaries with the fire and flavours. Among these ingredients you’ll find a mix of Japanese and native Australian flavours used in a natural way that avoids the stereotypes of “fusion” cooking.

Why is fire dining so popular now, and what is your take on it?

JB: When I envisioned the kitchen at Sonny’s, I never thought about a wood fire. I just knew I wanted the best food from a chef with a like-minded ethos, and the wood fire was ultimately Aarons’ idea.

AR: It makes everything taste better! It’s something I’ve always enjoyed, and there’s something natural about the way you end up cooking with fire that I like. It’s in some ways the most basic or simple method of cooking, but at the same time, it’s very difficult and poses all sorts of new challenges. You need to constantly think about what the fire is doing and look after it, so there is a more intrinsic connection to the food.

We use wood from a sustainable plantation, and then I source off-cuts from a couple of carpenter friends, so I’m also happy that we can avoid adding to the old-growth logging in the process. As far as its popularity, there’s something about it that’s nostalgic for many people; the smell, the smoke and the heat bring back memories of all sorts of experiences. It’s also a good antithesis for much of the over-processed, sterile and boring cooking out there. 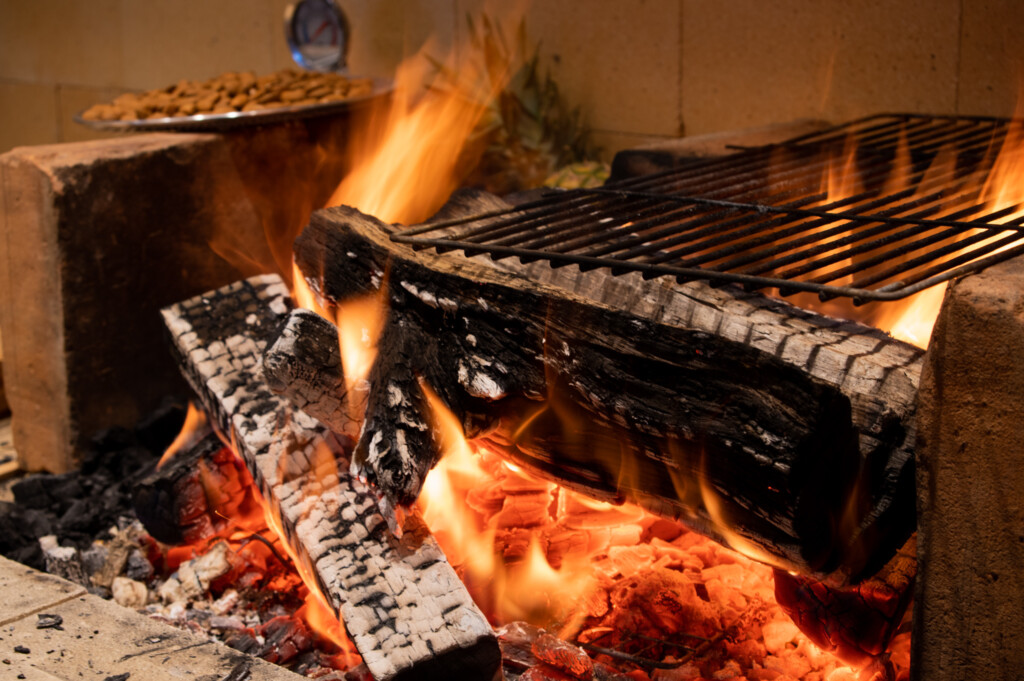 What is your philosophy with suppliers? You seem to be using Sonny’s as an opportunity to shine a light on emerging producers.

JB: If you have the power to help, then why aren’t you? We would love to give a shout-out to all our suppliers, producers and distributors that haven’t had a chance before or have but aren’t as well known, and they are all coming out with banging products.

Daisy Case: We love our suppliers. We love to use what buying power we have (a teeny tiny amount) to try and support businesses that may require an additional leg up. We also love to go direct to small wineries that may not have had the chance to gain a supplier or distributor yet to add visibility to their wine and brand. It’s also good for us, as some of the wine you wouldn’t necessarily be able to find anywhere else in Perth.

What about the bar?

DC: I knew when we opened that I wanted to have a big focus on cocktails. I was lucky enough to convince Chris Hodges to come and run Sonny’s with me, and between him and Gwyn McDonald, they are coming up with some unique cocktails playing on some of the ingredients used in the kitchen and channelling their joint knowledge. The cocktails are flying out the door, and it’s definitely what Mt Hawthorn needed!

And the wine list makes a point of looking past the established makers, often in diverse directions. What was the thinking with the way you put it together?

DC: Our ethos with the wine list is diversifying the wine scene. We buy from the under-represented in the wine community. POC winemakers (which there are not enough of), LGBTQIA+, women, small wineries run by couples, and daughters of big names that haven’t been put on the label yet. [Daisy jokingly calls them the forgotten women in wine]. It’s extremely important to us as a business that we build representation for minorities while we are open, invite as many of these people to join a community that has historically not been the best space for them and do as much as we can to make it cosy again.

What is the lasting experience you want to create for diners and drinkers?

JB: We will have a DJ playing up at the bar every Friday, Saturday, and Sunday. There’s the food, the atmosphere, the fire, great drinks. And I just want people to leave feeling like they’ve made great memories and new friends.