Waves of anticipation spread outwards from the South West as news spread that Ben Ing and Kirsty Marchant – former head chef and head gardener at world’s-best restaurant Noma – were opening a kitchen and store in Busselton. We caught up with the pair just after they opened to check in on how it’s going, and what’s coming next.

It’s rare that the opening of an Australian eatery would get a shoutout from Rene Redzepi, who is possibly the world’s most consistently revered chef. So, it seems otherworldly that the Noma founder would do just that for an opening in sleepy Busselton. But that’s just what happened a couple of weeks ago, and for good reason.

Ben Ing and Kirsty Marchant, the co-owners of Alberta’s, are formerly the head chef and head gardener of the groundbreaking Copenhagen restaurant. Now they’re plotting a very different course in the South West, breaking away from fine-dining and opting for (initially, at least) a more casual offering that starts with coffee and baked goods.

WA Good Food Guide’s Contributing Editor, Max Brearley, first caught up with Ben Ing back in January 2021 when he and Marchant were exploring what their new life would look like. For Marchant it was a return to her native WA, but for Ing, a Canadian, it was a fresh start. As the pair get into the swing of things, Brearley again catches up with both Ing and Marchant to see how Alberta’s is coming along.

You’ve been open a week or so now, how has the response been?

Ben: Yeah, there’s a few ladies who have been in multiple times, there’s a lot of return customers. And I think it’s because Kirsty really communicates that the menu changes daily or weekly and those small changes keep things exciting. It’s really nice to see regular faces and for them to see us in the kitchen. You say good morning, and instantly building a small connection.

Do you think the customers realise what your pedigree is? That you were both key members of the Noma team?

Ben: It’s probably a little bit of both. The people who know the story don’t say anything and they’re coming in half-because of that. But there’s a few people who have approached me on the pass and have said “Oh, where have you worked before?” and I say “Oh, well, Europe and back in Canada”, and then they’re pointing out the Noma books and say “I have that book too”, and then I’m like “Yeah, yeah, I worked there”.

Kirsty: It’s satisfying because you know that you’re doing a good job because they don’t have anything to go by [not knowing our story]. Some of the older ladies got onto the Busselton community board and started writing reviews, which was really, really awesome, because they had no idea [of our background]. So, I got told like three days in a row, you need to get on this community board, it’s really nice. 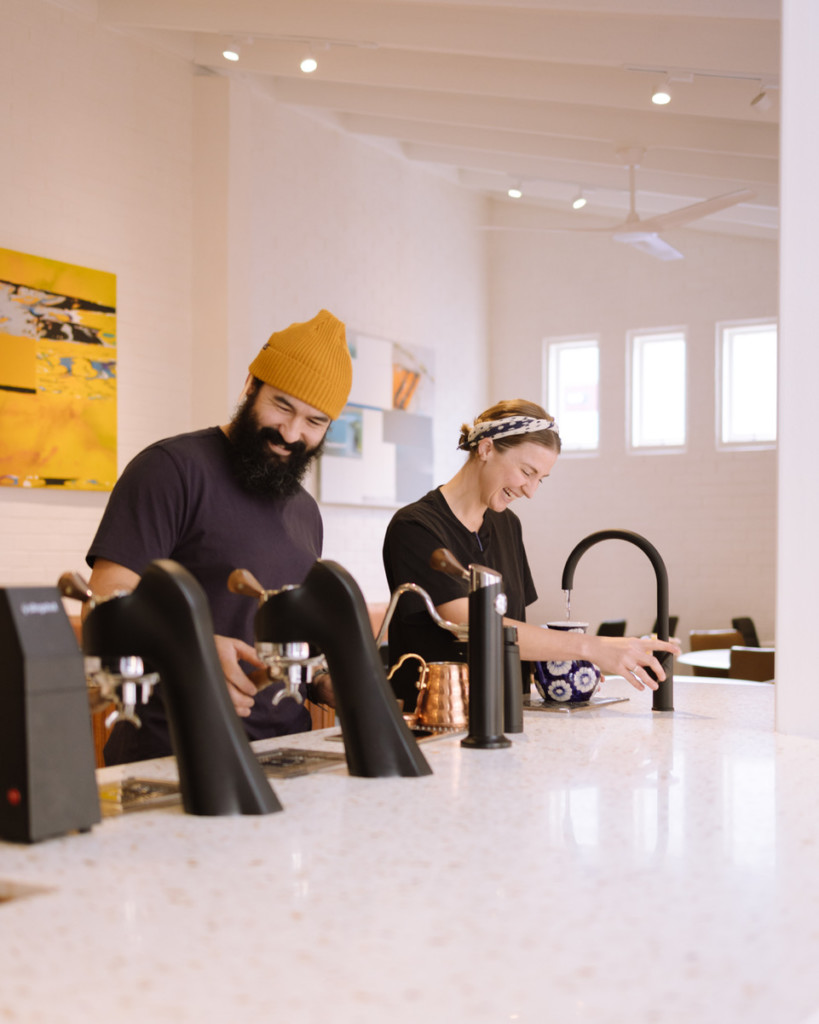 And how have the locals responded to the offering, as it’s fair to say it’s not your standard breakfast menu?

Kirsty: I guess that they’ve been pleasantly surprised because a morning bun and a pot of tea can just be bread and a pot of tea. But then instead, it’s this very, very well-curated thing that’s so simple.

I suppose it’s not your typical Australian breakfast.

Kirsty: Those menus became like the Australian breakfast culture, which was really cool when it happened first, and it is still cool when it’s done well. But I feel like there’s a lot of places now that overcomplicate things because they feel that they need to keep up.

We discussed before opening that it may take people a moment to come around to what you’re doing. So, how’s that going?

Kirsty: It feels like even today, compared to a week ago when we first opened, that people are coming in and really trusting now what we’re saying. There was a lot of “Oh, a broth for breakfast, I don’t know about that”. I mean that’s very Australian, but now I haven’t heard that for a week. We’ve gotten better at explaining that these are all small bites but if you have a broth and a morning bun together there’s a meal for around $20. And then if you want to add a sweet, our cheapest is $5, so basically eating like a king for $25.

A breakfast broth, both a meat and veggie one, might sound simple, but I’m assuming there’s a little more thought there?

Ben: Last week we did a roast chicken broth, and the vegetarian broth was based on more of a seaweed stock and dashi, so really that Japanese element coming through.  I had three or four dashis going with like smoked seaweed – with a local golden kelp that we were gifted – and also some wakame from further afield. Dan from Gunyelgup Farm is providing some of our produce and it tastes better from the farm directly. He brought some lemongrass around and it’s something I didn’t see in the gardens at home in Canada. So, we charred some of that up and finished it in the broth. 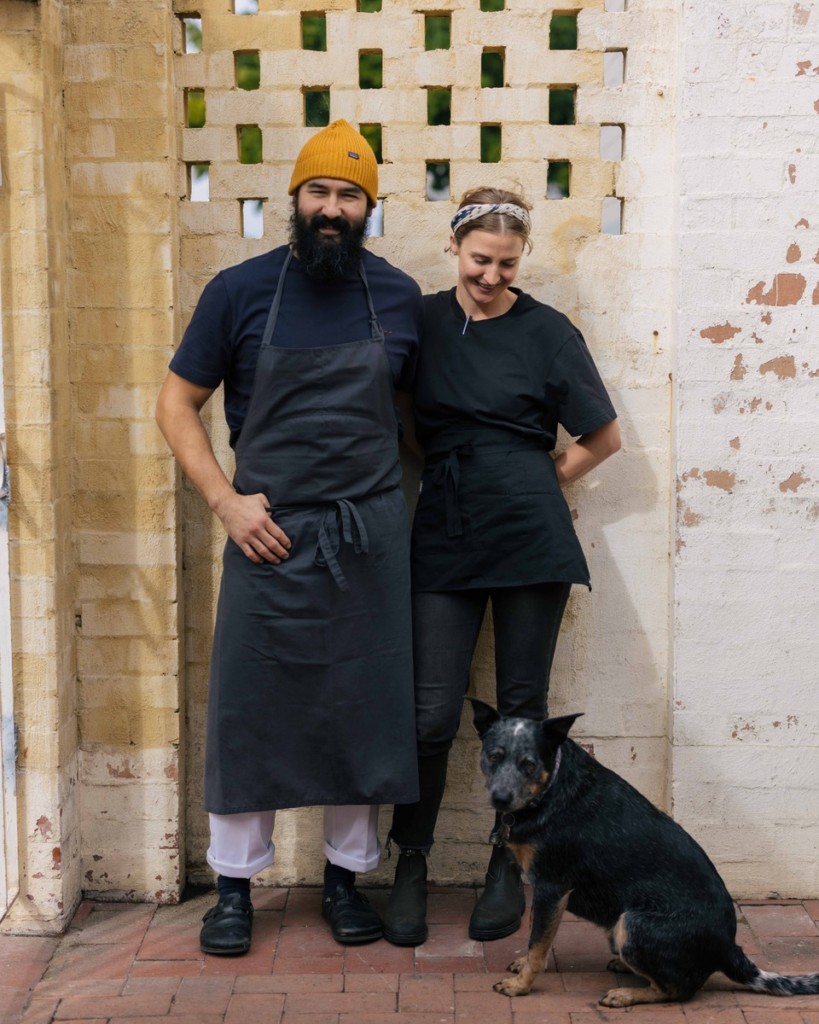 There seems to be a bit of theatre to the breakfast service?

Ben: Well, you come into Alberta’s and have the open kitchen, with the fire smoking away and you’re greeted by Kirst, and there’s the people making coffee right in front of you.

Kirsty: There’s a number of touches and details we’ve worked on. We had bowls specifically made knowing that Ben was going to make broths. It’s my favourite thing that he does and so we budgeted to have my friend Vaughan Smithson from Studio P in Leederville make broth bowls so you can hold them in your hand as well as use a spoon.

While your breakfast service is obviously hitting the mark, when can we expect the next step?

Ben: Lunch. I think we’re going to be shooting for the end of June. A Sunday lunch, and what that looks like is yet to be determined. We want to use the space to its potential, not that we’re under-promising right now. There’s a lot we want to do, but again it’s a case of rein back, let’s not get ahead of ourselves, a step at a time.