Bacala, stockfish, bacalao, tørrfisk, brandade, lutefisk, okporoko, baccalà mantecato… call it what you like, but salted and dried cod finds itself on the menu in just about every Middle-Eastern, Eurpoean and African culture.

Braised in tomato sugo and capers in Sicily; de-salted and poached with bay and peppercorns for the Provencal dip, Brandade; braised with potatoes, onions and olives for the Portugese dish, Bacalhoada; or deep fried in salt cod fritters from the Iberian countries, it comes in many guises.

Salt Cod is the biggest ‘agricultural’ export from Norway – one of the world’s largest producers of stockfish – and the national dish of Portugal. It has been the cause of wars and the single greatest exploitation of a fishery in human history on the Grand Banks cod grounds off Newfoundland, where cod had been ‘harvested’ almost to extinction from the 16th century onwards.

With robust international fisheries management agreements in place, cod stocks are recovering with New Scientist reporting in 2015 that cod “is making a comeback,” in both the North Sea and Newfoundland.

So, what’s the difference between stockfish and bacala? Broadly speaking – and everyone has an opinion on this – stockfish is the hard, salted and air dried cod mostly from Norway. Purists prefer its flavour. Bacala is the salted, but still fleshy version of salt cod. It is usually sold in a vacuum pack bag and is stored in the fridge. Bacala is easier to use and has a lighter taste. Stockfish can take up to seven days to re-hydrate, while bacala requires just 24-36 hours.

I prefer stockfish for braises and stews of which there are many recipes from Italy to Nigeria and from Spain to Norway. The portugese slow cook their de-salted and reconstituted stock fish in onions and olive oil, the Italians use tomato and capers ro produce a traditional holiday dish, often served on Christmas Eve, Baccalà alla Vesuviana.

In the south of France, there’s nothing like a bowl of creamy, olive-oil based brandade with crudites and an iced rosé on the table. It uses the fleshy bacala, not stockfish, and once poached, it is traditionally beaten to a paste and emulsified with oodles of olive oil in a morter and pestle. We use a food processor. It’s much easier and makes no difference to the finished product (as long as you don’t over-process). Brandade can be used as is or mixed with other ingredients to make brandade fritters and croquettes.

Stockfish may look scary and wrinkly and smelly, but it is a wonderful ingredient and, deonce re-hydrated and de-salted in the fridge, it is easy to use and a real attention grabber on your table, in all its many guises.

2 cans whole tomatoes (San Marzano, if you can get it) 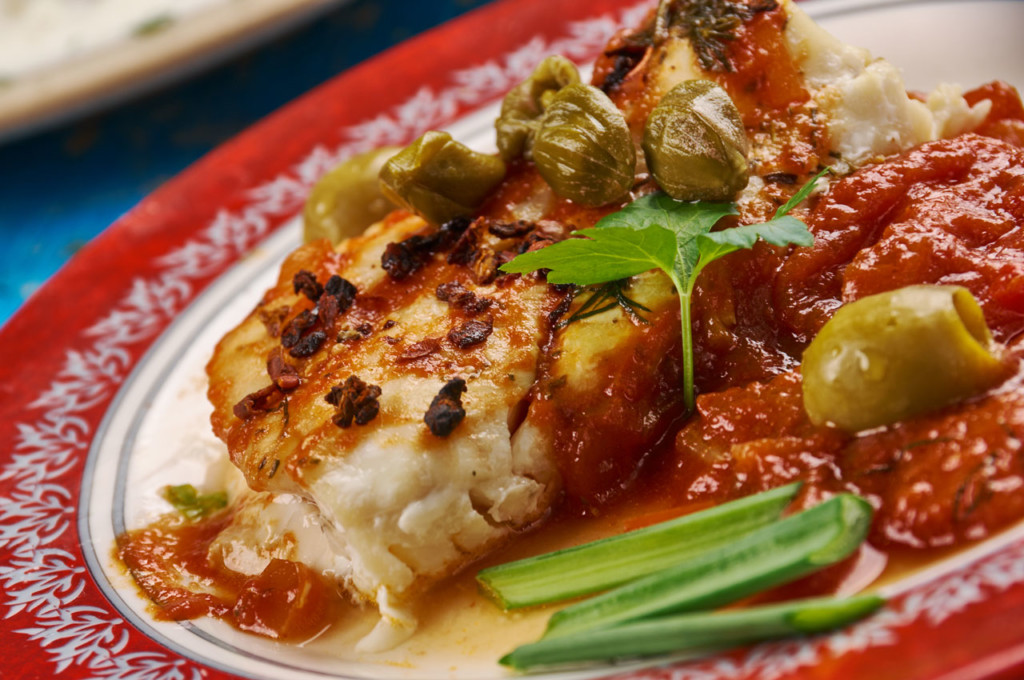