“I’ve been fishing here for fifty odd years and I always knew there was an amount of these cockles [sold as both cockles and clams] around,” says Bobby Hoult. “Indigenous people have been eating them for thousands of years and it’s the most obvious thing in many of the old campsites, cockles everywhere. But when we decided to go and have a look [in Shark Bay] I was amazed at how many there were.”

Hoult has a licence to hand rake for cockles between Esperance and Exmouth but, he says, “I’ve got no intention of wanting to go anywhere else because there’s more here than anywhere.” He harvests around 500kg a week in the pristine waters of Shark Bay. Commercial fishing is notoriously physical work, and this is no exception. Hoult points to the back of a small commercial boat loaded with manual rakes attached with two wooden handles. They’re clipped to the fisherman with a sailboard harness and they take the weight of the rig on their back, using the handles to steer in the shallows and lift the rake up and down.

“I’ve had a lot of younger guys who won’t do it because they can’t do it,” says Hoult, who has been fishing since 1969. “They always say to me, how come you can do it? I say mate I’ve been walking backwards, dragging nets all my life. I’m still going backwards. It’s not that difficult really. Course you can make it difficult, if you didn’t know any different, in the different kinds of bottom [sea bed], you could find it’s hard and muddy. Other times it’s nice, loose sand. But if you venture off the main track and all of a sudden it becomes too hard, go and find a better spot.” 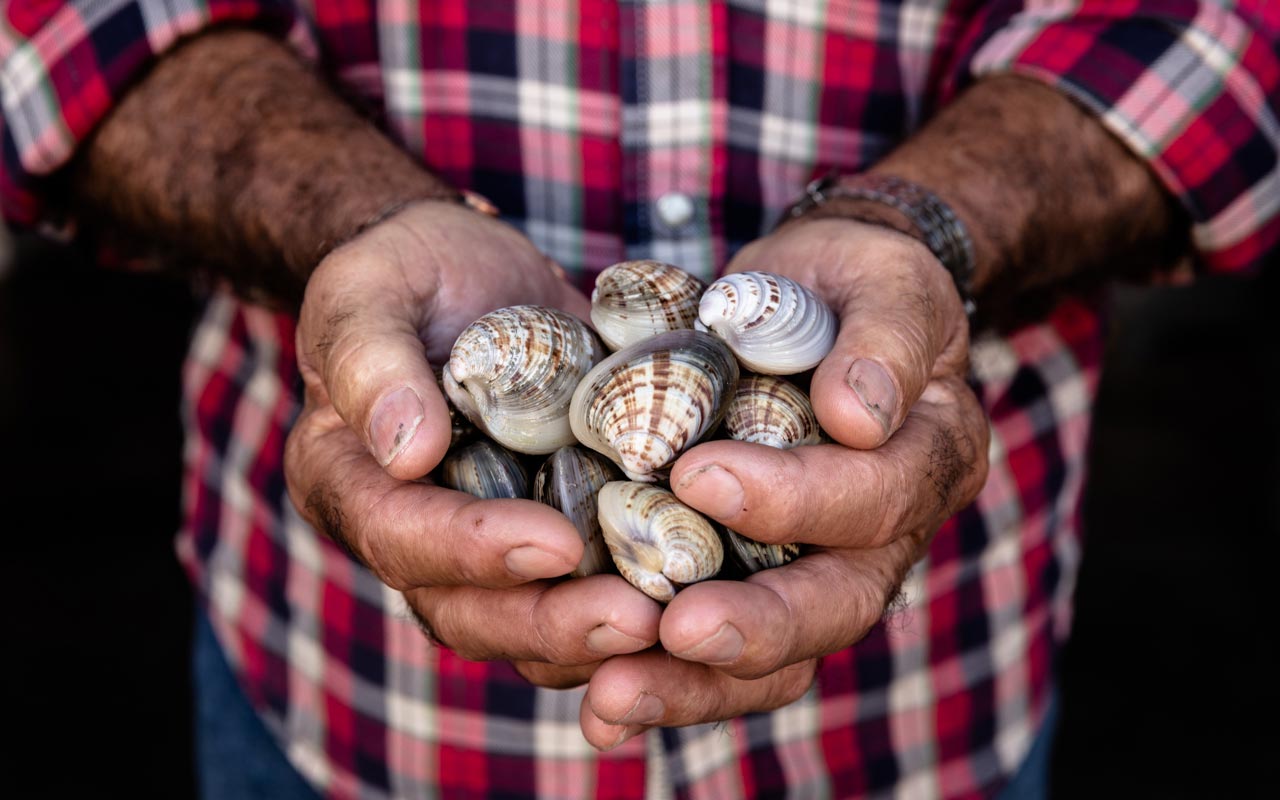 Hoult has been involved with a number of fisheries over his career, one of the first to build and lay crab pots locally in the late 1980’s, but he says he’s never come across a fishery that has so little an impact. “There’s not a lot of travelling, and there’s no bait, you don’t need ice and if you don’t get enough today and the weather turns foul, you tip them out and they stay in the water and you come back and get them tomorrow. It doesn’t get any better.”

His move into cockles wasn’t his original plan. “I got out of the crabs in 2010 with the intention to go back net fishing. At that period of time, a lot of the youth from the area all went to the mines and offshore. So there was a lack of crew and deckies. I just plodded around and then Johnny Craike [from Kalbarri], he used to be an abalone diver, he said how many cockles you reckon are up there.”

Now eight years on, Craike and Hoult have been instrumental in developing this new cockle fishery; undertaking a strict and expensive regime of environmental testing each year.

For Bobby Hoult the ocean is in his blood. “The old sailing vessel in front of the interpretive centre down on the foreshore was my families. I did my first five years commercial fishing on that for mullet, whiting, bream and tailor. My family’s been involved with the ocean from the pearling days, the turn of the century; the last century that is. My father and my grandfather on my mother’s side were the last two actually commercially pearling, probably in the 1950s. They stopped doing that and there was already a couple of other pearlers who 10 years before had gone net fishing, so they switched over for the next 20, 30, 40 years.”

Hitting the road Hoult passes me a package of cockles freshly harvested. While ultimately they’re destined for a demonstration at Geraldton TAFE, the chef-lecturer using wine and oil in a hot pan, Hoult has his own instructions. You can add a little bit of water if you want, he says, but as soon as they open up, you’re left with a cup of it. A fresh product from Shark Bay’s pristine waters Hoult says simply, “just throw them in a dry pot, with a sauce that you might like: chilli, soy, garlic.”