Sofika Boulton, head chef of Le Rebelle’s follow-up Bar Rogue, opens up on her career path, what cooking means to her and how she’s approaching her current role.

With the opening of Bar Rogue, Liam and Sarah Atkinson’s next act after Le Rebelle, Sofika Boulton stepped into her first head chef role and started a new chapter in her culinary career.

It’s a long way for Boulton from seven years ago when she was studying at university and working at a friend’s restaurant to make ends meet, washing dishes and running food. But it was that experience, she says, that had her hooked. “The biggest thing that made me want to be a part of a kitchen was the atmosphere. People are there because they want to be there,” says Boulton. “The industry gets a bad rap, but it’s such a fun job to have. I wanted to be a part of this. I wasn’t having fun at uni.” Six months in, Boulton left her engineering degree to pursue cooking.

Stints at Wildflower and The Flour Factory followed, each having its own influence on her pathway, and teaching her different skills. “Wildflower has been the most influential in terms of cooking, the food is incredible and super refined,” she says. “I learnt a lot about native Australian food. Much of my palate and food habits came from working there.”

“Before that, I was at The Flour Factory; I would say that’s where I developed the other part of being a chef, in terms of the mental and physical gymnastics,” says Boulton. “It was really hard work there, it was hot and busy. The hours were long. We had lots of customers, we did weddings and everything…when I left, I came out confident to walk into any kitchen and dominate it because it was such a beast.”

With a drive to keep learning and moving forward, Boulton resigned from Wildflower in October without a job lined up, but a strong desire to explore other opportunities. Soon after, her former head chef at Wildflower, Matthew Sartori, put her in touch with Liam Atkinson, who was planning the opening of Bar Rogue.

“I had a conversation with Liam and we kind of just immediately clicked. I was super set in that I didn’t want to leave Wildflower to go to a job that I wasn’t super excited about,” says Boulton. “Everything that Liam said was in line with what I wanted to do, he had this no inhibitions kind of mindset walking into it. It’s all in the name, it’s called Bar Rogue.”

The rogue element opens up the kitchen for play and opportunities to try different things, drawing from various cuisines and influences to see what works. “I like to take bits and pieces from everywhere and I kind of just put it all together into things that I think are gonna be cool,” says Boulton. “All the dishes that go on the menu go through a thinking process of ‘How are we going to make this rogue? How are we going to make this a bit different to the way everyone else is doing it?’”

Take the white bean dip that goes with their bread. “It started as just white bean dip and I packed it full of miso and made it super umami,” says Boulton. And a more recent addition to the menu has been the fried banana pie with sesame and vanilla ice cream. “I made a banana pie and I wasn’t excited by it, so I ended up making a super thick tahini caramel and put that inside with the bananas. I used roti pastry as the pie crust so it was like a banana roti but it was in a McDonald’s pie form.” 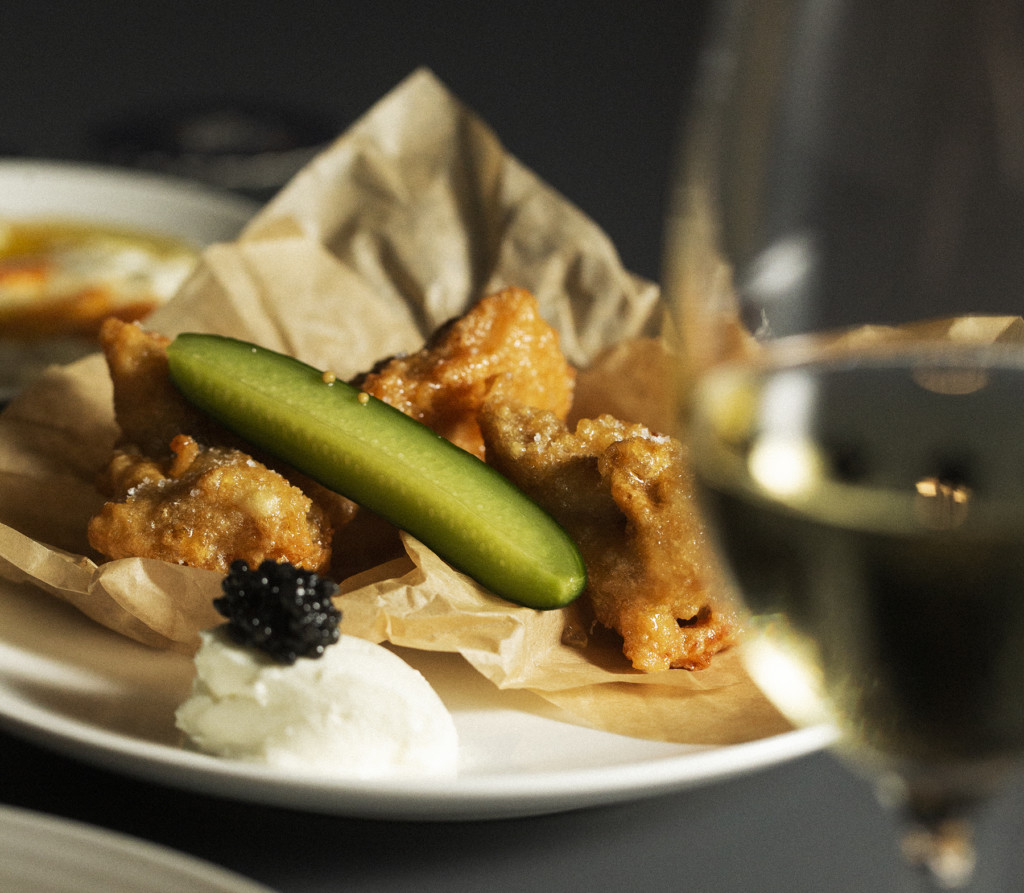 Another popular item has been Bar Rogue’s take on a katsu sando with a meatball filling, which was Liam’s idea but Boulton’s to execute. “I’ve only ever had a katsu sando that was a pork chop, not one made out of pork mince,” says Boulton. “I tried it out with a few different things to flavour the mince, then we also make our own sauce – a super umami tasty, delicious sauce that makes you want to eat more.” The result is a fluffy pork-mince farce with an ultra-crisp coating, offset with shredded cabbage and that addictive sauce.

The sando has since become a staple, returning to the menu frequently as a special that’s all-but guaranteed to sell out. Then there are a few dishes that have become staples, like their lobster tacos (crisp-fried wonton shells with lobster and shichimi togorashi-esque crumb) and cold fried chicken served with fromage blanc and caviar (their take on Momofuku Ko’s own version). Whatever the day, expect the Bar Rogue menu changes regularly with seasonal produce and new ideas streaming out from the kitchen.

The challenge for Boulton is not only to keep up, but to keep the menu snacky. “The whole idea behind Bar Rogue is to come in, sit and drink, and have some fun while snacking on delicious food with your friends,” says Boulton. It’s for that reason the chef approaches the food with the intention to make it shareable and something that’s easy to eat with a drink in your hand. “Sometimes I’ll come up with an idea that works and then I have to figure out how to make it snacky and shareable – how do I make this something you can pick up and be comfortable eating, that doesn’t make a mess while you are drinking?” 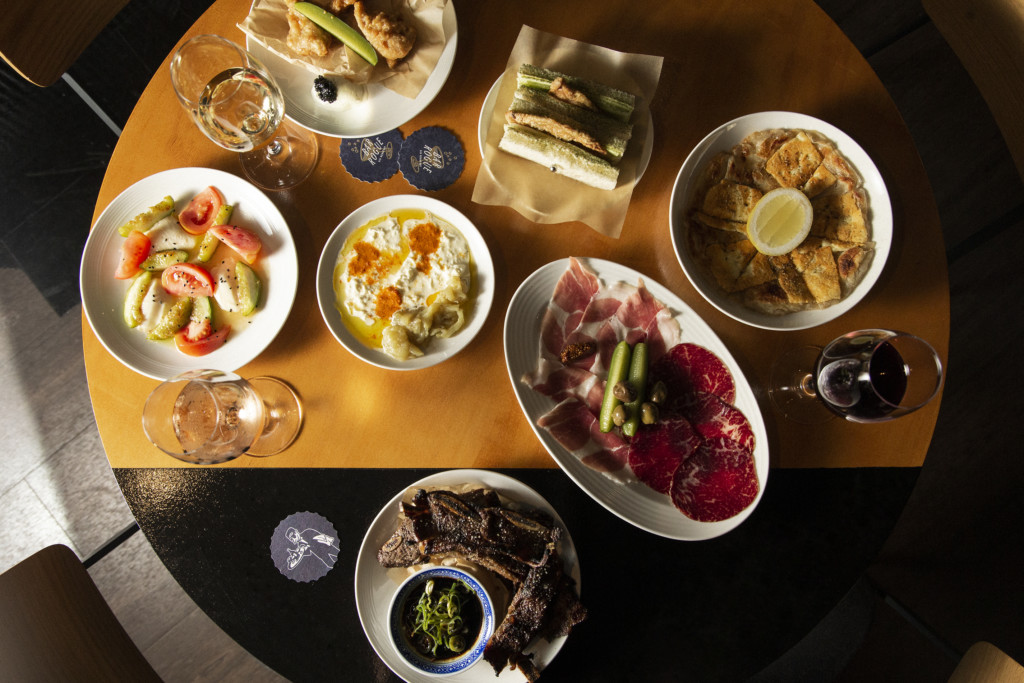 While Bar Rogue appears to have settled into a groove, Boulton remains vigilant, and determined to keep changing and pushing. After all, that’s in the DNA of the venue. If she didn’t relish the challenge, she wouldn’t have signed up in the first place. “I think the beauty of it is that you never do find your feet, there’s always that scrabble, there’s always that anxiety of how do we do something better, how do we evolve further”, she says. “I think that’s why chefs get so addicted to cooking, because you can never win, you can never beat it. You can never master it.”

As for anyone wanting to make the leap and enter into the world of cooking, Boulton has her own advice. “The biggest thing is to keep evolving, keep learning and not settling,” she says. “I’m constantly trying to learn from everyone, even if I think it’s not a better way than what I have, and I’m always changing the way I do things. I don’t get comfortable.”