Interview A path to great wine

Blind Corner, in Quindalup, Margaret River, is part of a cohort of avant garde WA wineries. Run by Ben and Naomi Gould, it focuses on vineyard health and attentive but minimal-intervention winemaking, producing an array of classic and creative styles, two of which landed in this year’s Top 25. Mike Bennie dug into how they do it.

Hi Ben, when did the winemaking adventures start?

I moved south from Perth in 1996 and started working on our family marron farm. Following the sale of the farm, Dad bought a vineyard and property in Yallingup and we started Deep Woods Estate in 1997. Alongside my brother, and of course with parental “advice”, I worked here while learning about the world of winemaking.

Blind Corner is your own project with Naomi, your wife. When did that happen and how?

We first bought a smaller property known as Blind Corner in 2005 that we began farming organically and biodynamically and making a small but sustainable amount of wine from. Then, in late 2014, we made the leap and bought our larger property in Quindalup that has become our permanent home. We immediately started converting to organic farming and have been officially certified organic and biodynamic since 2017. The farm is 30 hectares with 20 hectares of vines, some Warre beehives, some random animals, quite a few roos, birdlife and some sheds. 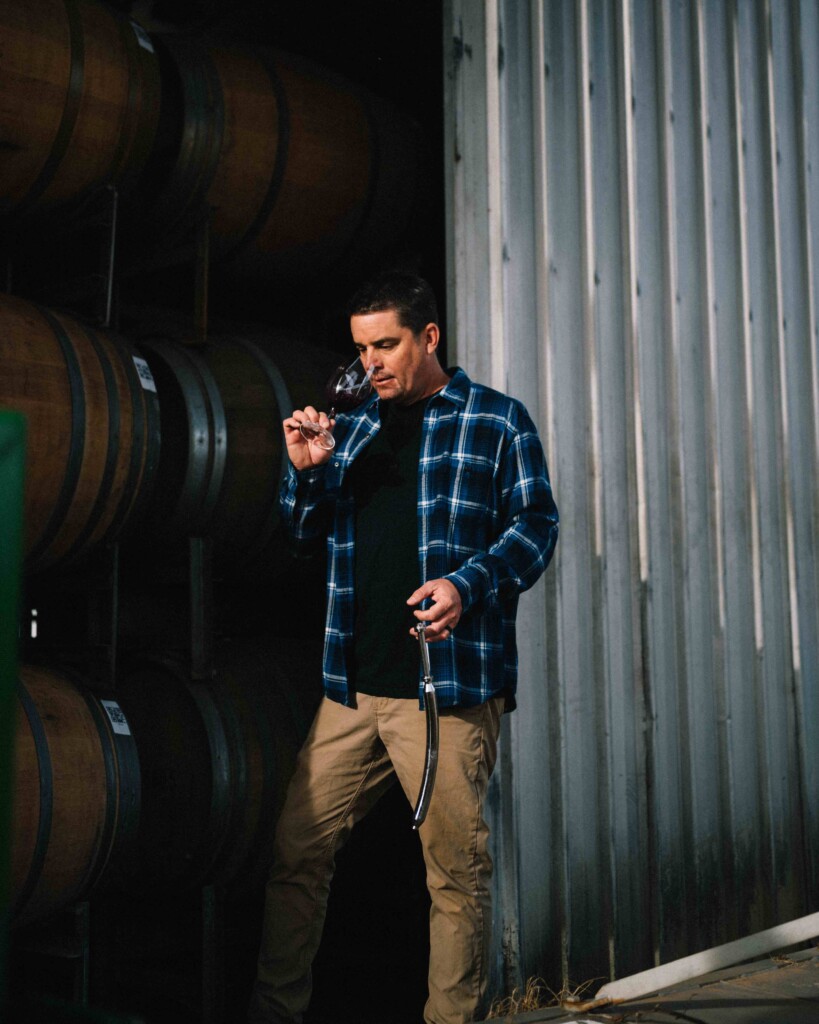 What is it about Margaret River that feels so right for your winemaking?
The region is bound by ocean on three sides. It’s a place that feels really elemental, with salty air, lots of sunshine at the right time for grapes and big rains in winter (not summer). There have been a few freaky events in recent years, but it’s generally magic for growing grapes.

What’s been the motif for your winemaking?
I guess you could say that outside of making some of the regional staples, albeit our way, we like alternative styles and lesser-sung varieties. Because we didn’t plant the properties, we took time to work out what the best use of each variety was. For example, we feel syrah makes a great nouveau style, and skin-fermenting sauvignon blanc makes for a more textural and interesting white.

That said, our travels inspired what we grafted onto vines, like aligoté, which reminds us of going to wine bars in Beaune, Burgundy. Sangiovese and pinot grigio gave us a bit of an Italian story, and were from places we loved visiting. Doing it without chemicals makes sense to us, too; it’s how we want to eat, so it’s how we want to drink.

What are some of the other broader changes you’ve seen in the region in your time there?
People are more experimental, and there’s more interest in broader wine styles to go with a normalising of different styles – pet-nats and orange wines are good examples. It can be quite hard, but the second generation and newer-to-region producers are doing well to change their approach, too. It’s interesting to see a lot of second-generation vignerons actually working with their children to shift the culture on their own wines and looking to steer newer-generation drinkers away from original staples.

We’re at a point where it’s very hard for younger generations to own land and grow grapes here. Iwo and Sarah (Si Vintners) were more or less there when we started, Rob and Gen Mann (Corymbia) have come through more recently, but it’s starting to get out of reach of younger producers, outside of maybe leasing land, so it will be interesting to see that play out in the next decade. 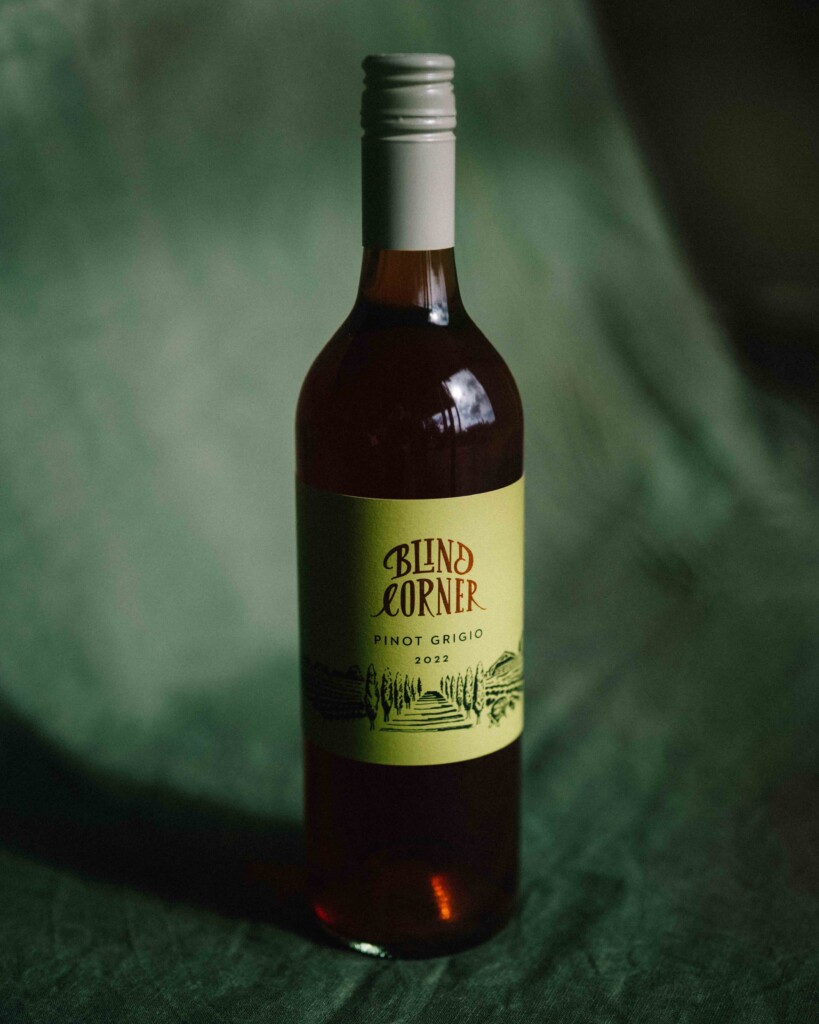 Alongside those challenges, what else is on your mind regarding next-generation producers, including those already here?
There are more instances of summer storms and extreme weather events, for one. Varieties like cabernet require a bit more modern-traditional thinking, hang time is important, and cabernet is tough generally, so that seems to keep on keeping on. Drought-resistant varieties are interesting here, maybe increasingly important, but we’ve just rolled through two of the wettest winters in recent memory. The old adage was to fill up the dams in winter then use them in the dry summer, but that’s getting topsy-turvy. The changes in weather bring a lack of predictability, which is a real challenge; we’re kept on our toes, and those coming in or sticking to their guns are finding it a significant mind-bend to get across how to mitigate those issues.

So what’s next then? What does the future hold for Blind Corner?
Well, it’s kind of straightforward, but we’re just continuing to do the one per centers on the farm, the little things that add value to vineyard and fruit quality. Yawn, right? But that’s our thing. We like getting down to Great Southern a lot, indeed, we have a little piece of land there that rolls into amazing forest. The people down in Great Southern are really nice, there’s a great and supportive community of wine folk there, and we like saying that we can visit the other Denmark for a weekender. I also really like the state of WA’s crumbed chicken dishes and have a thing for cheese kranskys from servos, and there’s plenty of them between here and there, so that’s a real bonus. 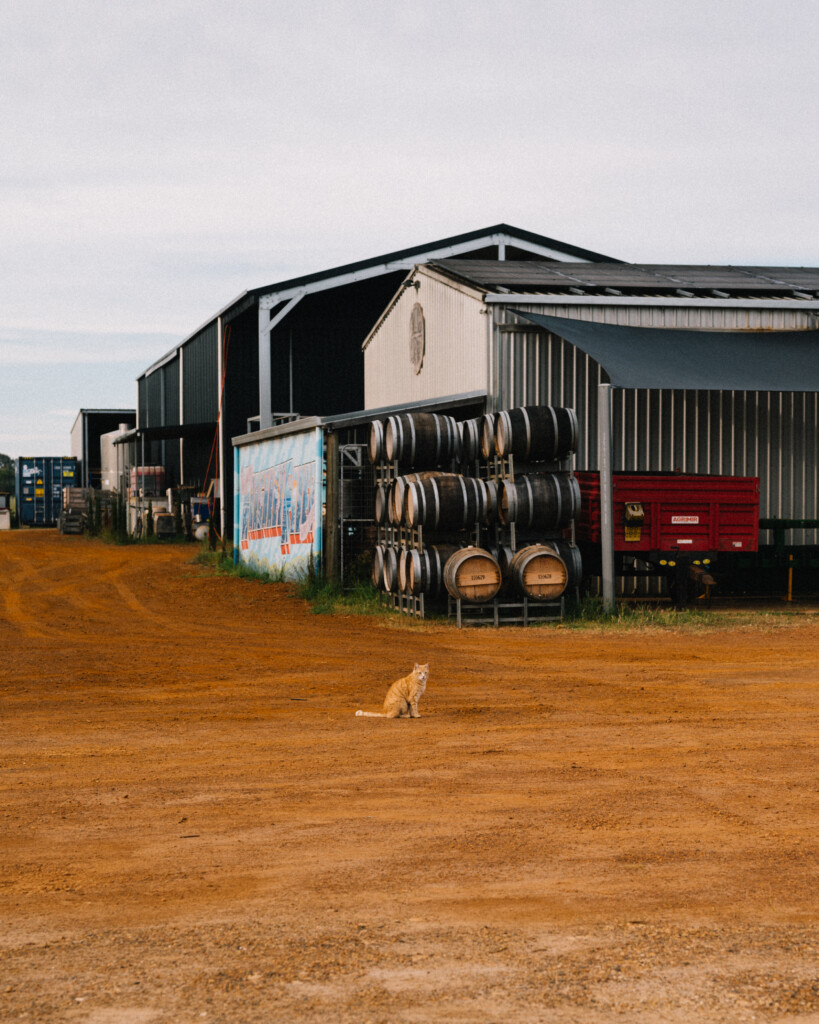